The story of the pivotal Battle of Hastings, when the Normans under William the Conqueror successfully invaded England in 1066, is told scene-by-scene in the 230-foot-long Bayeux Tapestry.

Distances in Normandy are short and, as long as you stick to the autoroute — well worth the tolls — you’ll make very good time. Our next stop is Bayeux.

Its Saturday morning and this normally sleepy square has erupted into a busy farmers’ market. The long tradition of those who grow it selling directly to those who eat it thrives throughout France. And the food couldn’t be fresher.

Bayeux’s claim to fame is the Bayeux Tapestry which hung in this cathedral. It’s a 900-year old embroidery which tells the story of arguably the most memorable event of the Middle Ages — the pivitol Battle of Hastings in 1066.

The tapestry now hangs proudly in a museum just down the street.

Headsets narrate the 230-foot long cartoon telling the story of William the Conqueror and the Battle of Hastings. Don’t worry…if you lose your place, you’ll find supertitles in Latin.

England’s King Edward was about to die without an heir. The big question: Who would succeed him. Harold, his English brother-in-law, or William, his French cousin? King Edward chose the Frenchman,William. But when the king died, Harold grabbed the throne. William, then known as ‘William the Bastard’, thought the throne was rightfully his. So he prepared his army — gathering weapons and coats of mail and sailed from Normandy across the English channel to the south coast of England. He met Harold at the town of Hastings, where they fought a fierce 14-hour battle. While the English fought valiantly the Normans had an advantage: horses with stirrups. Historians atribute their victory to these stirrups. Extra details of the battle show up below — here dead soldiers are being stripped of their valuable armor. Harold was killed — arrow in the eye…ouch — and his Saxon forces were routed.

The end of the tapestry is lost but the end of the story is well known: William — now “William the Conqueror” — marched into London and claimed his throne. Now he was both Duke of Normandy and King of England. 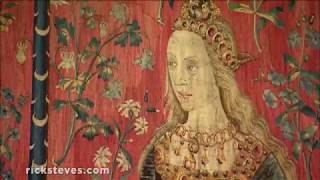