The port of Bergen, Norway’s first capital, was a trading partner in the medieval Hanseatic League. Its commercial heritage, based on cod, lives on in its fish markets, museums (Håkon and Hanseatic), and historic Bryggen quarter.

Bergen is Norway's second city after Oslo. Situated just one sheltering island from the open sea, it's long provided ships a safe port of call. It's a busy working port. It's popular with cruise ships and an essential refuge when heavy winds drive in the boats that serve the North Sea oil rigs. Much of Norway's current affluence is fueled by the oil it drills just off shore.

Visitors enjoy charming cobbled streets which surround the harbor and climb the encircling hills. Bergen's popular funicular rises high above the city offering commanding views. Surveying the surrounding islands and fjords, it's clear why this city is known as the Gateway to Fjord Country.

Back down at the harbor, the bustling fish market has become a food circus of eateries selling fishy treats to tourists. Eager merchants provide tasty samples and they’ll happily assemble a plate to order.

This fine harbor has a long history. Seven hundred years ago, local kings established Bergen as Norway's first capital. The 13th-century Håkon's Hall was part of the royal residence. In a city built of wood, stone buildings represented power. As in many Norwegian sights, the included tour here brings meaning to an otherwise hard to appreciate attraction.

Guide: Welcome to the Håkon's Hall which is today one of the more important secular buildings we actually have here in Norway from the Middle Ages. You’re now standing up as you can see in the main hall. I think this is also the best location where you’re able to appreciate actually how large this building is. And today it is by far the largest secular stone building in Norway from the Middle Ages.

The adjacent tower dates back to the same period. Its simple design favored security over comfort. It was basically four stout rooms stacked atop each other. This was the chapel.

From the roof we enjoy a royal view.

Guide: For centuries this actually happened to be the tallest building in Bergen. What I think the building is trying to represent today is the attempt the Norwegian kings made in the 1200s to make this a political center.

Colorful wooden warehouses mark Bergen's touristy historic quarter. Since the 1300s, this was its old German trading center — called Bryggen, or "The Wharf." Along with being home of Norway's king, Bergen was a member of the mighty Hanseatic League and therefore a trading power.

The Hanseatic League was an alliance of cities stretching across Northern Europe from London to Russia. They worked together for freer, safer, and more profitable trade in an age before modern states could provide a reliable environment for business. German merchants basically ran Bergen's trade for 400 years. In the 1500s, Bergen was essentially a Germanic community of 2,000 workaholic merchants surrounded and supported by 5,000 Norwegians.

The Hanseatic Museum stands on the edge of the wharf. With creaky wooden interiors and maritime hardware, it helps you envision the economy that made Bergen.

It was all about this fish. Cod — a form of protein that could be dried, preserved, and shipped anywhere. Bergen is the place where cod from the north met traders from the rest of Europe. The Norwegians were the good fishermen. The Germans were the good merchants. They needed eachother and Bergen is where they met.

Rooms upstairs — with hundred-year-old cod hanging from the ceilings — take you back to the 1700s. It was an all-male society with strict rules and a focus on business. Because of the ever-present danger of fire, it was generally cold and dark. People slept cozy-as-they-could in cramped cupboard beds. While there was hardly room for company, this bunk came with a pinup girl.

Bryggen's wooden core is made of long rows of planky warehouses leaning haphazardly across narrow alleys. It's burned down and been rebuilt several times and it's now touristy and full of shops and galleries. Still, strolling here, you can appreciate the heritage. 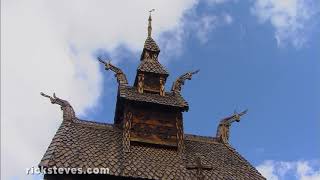 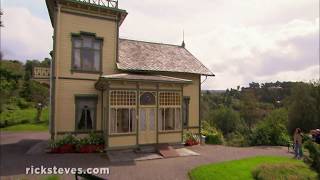