Berlin and the Cold War: Divided, Then United
Share

East and West Berlin were divided for four decades by the Berlin Wall, designed to keep East Germans from escaping — though some made it through, as recounted at the Museum of the Wall at Checkpoint Charlie. People power tore down the wall in 1989, reuniting the city.

With the end of World War II, Berlin was divided between the victorious allies. Eventually the French, British, and American sectors became West Berlin and the Soviet sector became communist East Berlin. For the next four decades the people of East Berlin were subjected to lots of propaganda and that included art.

Socialist realism — the art of the communist era — actually went beyond censorship. Art was legitimate only if it actively promoted the state. This mural, Building the Republic, dates from 1952. It’s a classic example of Socialist Realism, showing the entire society delighted to work together toward the Marxist utopia — industrial workers, farm laborers, women, and children… all singing the same patriotic song.

The communists also built Berlin’s 1,200-foot-tall TV Tower — quite an impressive erection back in the 1960s. Its purpose, along with better TV reception: to show the power of the atheistic state at a time when East German leaders were having the crosses removed from churches. But when the sun beamed on their tower, a huge cross reflected on the mirrored ball, high on the grandest spire in East Berlin. Cynics called it “The Pope’s Revenge.”

This boulevard has long been a main drag. Destroyed during World War II, Stalin decided this street should become a showcase for communist East Berlin. In the 1950s, he had it rebuilt with lavish Soviet aid and named it “Stalin Boulevard.”

Today this street, built in the bold Stalin Gothic style so common in Moscow back then, has been restored and renamed for Karl Marx. It’s actually becoming en vogue, and gives us yet another glimpse at what was communist Berlin.

But even with massive housing projects and lots of clever propaganda, it took a wall to keep the people of East Berlin from leaving.

The “Anti-Fascist Protective Rampart.” That’s what the East German government called this Wall. They built it almost overnight in 1961 to stop their people from fleeing to freedom in the West. Over two million East Germans escaped before this wall was built.

The Berlin Wall Memorial is a stark reminder of the millions trapped behind this wall before it came down. Within its park-like grounds which were once a no-man’s land are information posts and photos of people who died trying to cross the Wall. The Wall was actually a complex of two walls: the outer one was a 12-foot-high concrete barrier — its rounded top was designed to discourage grappling hooks. Sandwiched between the outer wall and an inner wall was a no-man’s-land (or “death strip”). The complex circled what was West Berlin, stretching about 100 miles — it effectively made the western sector of the city an island in the middle of communist East Germany. And always vigilant were many lookout towers.

East German guards manned about 300 towers like this to stop anyone attempting to escape. Only a couple of these still stand.

Checkpoint Charlie — the most famous border crossing between the East and West — stood about here. Once a tense and foreboding place, it’s now a garish commercial free-for-all. Where serious military guards once stood, today actors pose playfully with tourists. Symbolizing the nerve-wracking stand-off of the Cold War: a young American soldier faces east and, on the flipside, his Soviet counterpart faces west.

The adjacent museum, the House at Checkpoint Charlie, shows how desperation drove East Berliners to all kinds of creative escape attempts — over, under, and through the Wall. Escapees would hide, crammed into tiny cars. This one drove six people to freedom before finally being discovered. In another car, a person was actually hidden in a false gas tank. And this vehicle — armored with concrete and iron plates — simply blasted through under a hail of bullets.

Exhibits show how tunnels were used for transporting people to freedom. Rooms recall the artful diplomacy of the age, including President Reagan’s famous speech.

And the last room celebrates the happy ending, the euphoric days in 1989 when people-power literally tore down the Wall.

With the Wall gone, the two Berlins were mended together and the scars of the Cold War began to fade. Potsdamer Platz is a symbol of Berlin’s rebirth. Before World War II, it was the Times Square of Berlin — famously one of the busiest squares in Europe.

It’s hard to believe, but during the Cold War — as recent as the 1980s — this entire area was a desolate and deadly no-man’s land. This line marks where the infamous Berlin Wall once stood. That was East, that was West. And back then, standing here, I’d be dead.

Now big business has moved back in, turning this area into a towering office park and shopping mall.

Eastern Berlin has become a bustling part of the city. This huge square, Alexanderplatz, was a commercial center of East Berlin in the communist days. Today it’s an explosion of capitalism with a relaxed and fun-loving atmosphere. 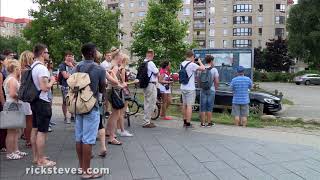 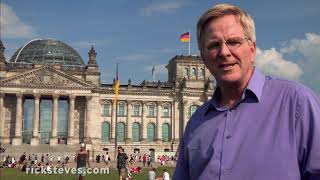