Leipzig remembers its tough 20th century with a little whimsy. This statue represents how East Germany endured two harsh dictatorships in succession: the flat-palmed Sieg Heil! of the Nazis, and the proletariat’s raised fist from the communist era. This poor fellow, repressed by both regimes, with his head scrunched down, seems to represent individuality under siege. Somehow, he’ll get through it all.

To learn more, step into Leipzig’s Contemporary History Forum — which tells the 44-year story of communism in East Germany. After the devastation of World War II, the line between east and west was drawn, and Leipzig ended up in Stalin’s camp. In those desperate post-war years, the stability and security provided by East Germany’s communist government was appreciated. Out of the squalor came a forced uniformity and, if you played by the rules, life was not miserable. Housing was a major priority, as so many were homeless after the war. Locals recall how there wasn’t a lot, but people had what they needed. Generally, what they had was what their neighbors had — children all had the same blocks, books, and cuddly stuffed pets. Western pop music, while reined in and certainly controlled, was allowed — from the Beatles to Jethro Tull.

The hated secret police force in communist East Germany was the Stasi. Its old headquarters now houses a museum dedicated to telling the Stasi’s dirty deeds. It offers a fascinating look at what it took to control the people.

Gisa: This is the symbol for the Ministry for State Security — Staatssicherheit— “Stasi”
Rick: Stasi — “state security.”

Modeled after the Soviet Union’s secret police, the notorious KGB, the Stasi recruited over half a million informants from every walk of life. It collected mountains of data on its citizens.

The former offices contain tools of the trade: a small camera that could be concealed in a briefcase, easy-to-hide microphones — including one hidden in button, disguises, and forged documents.

Gisa: The Stasi officers sat people on chairs with a piece of cloth and the piece of cloth would absorb the smell when the suspects sweated during the interrogation. And then they placed the cloth into these jars, preserving the smell. And whenever something suspicious turned up — for example, a leaflet — they brought in the dogs. The dogs smelled the item, and then smelled the jars.
Rick: So the dogs would match the smell?
Gisa: Exactly.
Rick: That would be enough to send them to jail?
Gisa: That would be enough.

All mail and packages coming into the country were searched. These machines enabled agents to steam letters open, read them, and then reseal them. The Stasi stole millions in West German hard currency (sent to struggling East Germans by West German relatives). And they confiscated piles of cassette tapes that [which] contained forbidden Western pop music. These cassettes were then re-used to record interrogation sessions.

Rick: After freedom, people were free to look at their personal files?
Gisa: Yes, but it was an agonizing decision to make. The Stasi had hundreds and thousands of informants, so they were colleagues, friends, family members spying on people, and then it was very difficult to choose: Do I want to know what information the Stasi kept on me, or would I also — I would also find out who spied on me.
Rick: So you could look at your file, but you might find your uncle was informing on you, and maybe you just…better not go there.
Gisa: Exactly.

Leipzig’s beloved St. Nicholas Church played a pivotal role in the people’s successful fight for freedom. In the 1980s this venerable church hosted weekly prayer meetings for peace. These turned political, making St. Nicholas a staging ground for the Peaceful Revolution that would ultimately topple the communist regime. A column in the church square celebrates the church’s contribution to German freedom.

Rick: So eventually these Monday prayer services for peace spilled out of the church and into the city at large?
Gisa: Yes, they got bigger and bigger every week. The largest demonstration here in Leipzig was 450,000 protesters, but they all remained peaceful, and that’s the biggest accomplishment. That’s why there was no reason to shoot them
Rick: So what eventually happened?
Gisa: Eventually the wall came down in Berlin, the borders were opened, and the people had gained their freedom.
Rick: The “Peaceful Revolution.”
Gisa: Very much so. 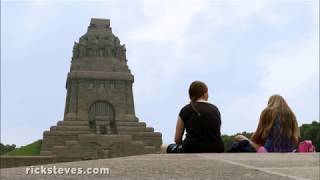 Leipzig’s Monument to the Battle of the Nations