Just as New Orleans celebrates Mardi Gras, much of Europe celebrates Carnival — and each country has its own way to party. In Slovenia, a land with deep pagan roots, villagers scare off winter by dressing as Kurent — a big, wooly, fun-loving Slavic god of hedonism.

To get a better sense of the pagan roots of Carnival we head to Slovenia.

For centuries the Alps have sheltered these high isolated villages from the influences of distant cities. Tiny communities like Drežnica have preserved ancient pagan traditions even as they've embraced Christianity. The festivities begin as night falls. Anticipating what's ahead, villagers retreat indoors, leaving the streets deserted. At the stroke of midnight, the street lights are turned off and darkness swallows the village.

Village bachelors carrying fiery torches sing a romantic song about the moon. Their song erupts into a cacophony as they began marching through the streets.

As the parade noisily through the village their clanging and banging announce that Carnival has arrived. Before sunrise, the bachelors gather at the local pub where they transform into an ancient cast of characters come to life in this centuries-old celebration. The young men cajole each other as they get into character. As is done each year, a smoldering fire is lit in a wooden wagon. The smoke evokes a pagan scene around the animal-skinned men called “the Ugly Ones.”

The procession's somber leader sets the pace, followed by the accordionist playing the town's carnival polka. The bachelors, who wear fluttering ribbons, are “the Beautiful Ones.” The parade is a cast of traditional characters, such as “the Doctor,” and a “Gypsy” who offers to repair the town's tools. The “Old Couple” represents the village elders. The lottery wagon suggests everyone's a winner, followed by an odd character called “the Lucky One,” carrying a rooster that will be raffled off. The wild card “Cop” brings up the rear.

Disguised by masks they carved themselves, the trailing Ugly Ones make a racket with huge bells to scare off winter and its evil spirits. They move alongside “the Devil,” keeping a watchful eye out for boys they'll later chase.

The Beautiful Ones eventually separate from the others, stopping to knock at every door in the village. When the homeowner greets them, an animated debate ensues.

Eventually, they're invited in. Once inside, music is played and toasts are made to good health and a good harvest. Back on the streets, the Ugly Ones are hunting for teenage boys who one day will become Ugly Ones themselves. When caught, the boys are whacked with messy ashes. Humiliated boys dream of the day when they'll be initiated and become chasers themselves. The Cop attempts to maintain order but apparently wants this part of the tradition to remain a secret.

Slovenian Carnival traditions survive beyond the mountain villages, and the country's deep pagan roots thrive in towns like Ptuj, and this is the undisputed Carnival capital of Slovenia. On the Saturday before Ash Wednesday, Ptuj throws a huge party called Kurentovanje. The stars of the show are shaggy monsters called “Kurents,” fun-loving Slavic gods of hedonism — sort of the Slovenian Bacchus.

Carnival spirit is in the air. Men and boys help one another with their heavy sheepskin costumes. The boys are proud to be part of this once secret brotherhood. Their outfits can weigh 40 pounds, which, with the addition of heavy metal bells and handmade masks, transform the wearer into a scary Kurent. The wooly mob rattles and clangs its way from door to door to chase away evil spirits and frighten off winter. Eventually, the homeowner relents and comes out to meet them.

To quell the clamoring mob, the homeowner offers the head Kurent a sausage and a few cups of wine for the gang. They all swing their hips loudly with satisfaction. This ritual is a remnant of the distant past when families were persuaded to share food during hard times.

Another band of characters roams from house to house. It's a group of ploughmen pulling a colorful wagon decked out in ribbons, representing fertility and the coming of spring. The homeowner is asked for permission to “plough for the big turnip.” The ploughmen then drag the fanciful pile behind men dressed as horses. This “wakes up the soil” in preparation for a season of bountiful crops. The cracking whips announce the procession. After the symbolic ploughing and sowing, the homeowner offers eggs and a sausage, and wishes the merry band good health and a good harvest.

The festival is capped with a grand parade. Thousands of visitors line the route. Groups of villagers from near and far display whatever symbolizes their trade or tradition.

The snap of whips keeps the noise level up to ensure winter stays at bay. The noisy highlight is the pack of 300 Kurents stomping through the streets. Different villages have unique styles, but they all swing their hips to get their bells clanging as loudly as possible, as they sweep up young women in the crowd in a woolly embrace to usher in the spring. 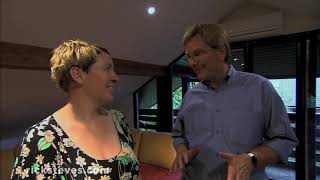 Dinner with a Slovenian Family