We gain insight into Slovenian culture by visiting a family at home. Extended families commonly share a single home with separate living spaces. The family discusses the laidback Slovenian lifestyle, their mellow curse words, and the changes wrought by independence.

This land has seen lots of change. But one thing that's constant is the warmth and hospitality of its people.

Tina: These are my mom and dad.
Rick: Dober dan!
Tina’s mom: Dober dan.
Rick: Nice to meet you.

Tina's having us over for dinner to meet her family

Uh-oh, little Anže's more interested in bedtime than us. While Grandma and Grandpa take care of him, Tina and Sašo are giving us a peek at their apartment. They converted the attic of Tina's childhood home — creating plenty of space for their growing family.

Tina: Here we are.
Rick: Whoa. This is quite a surprise. When you come in, you don't realize how much is here.
Sašo: It doesn't show from the outside, does it?
Rick: You wouldn't know, looking up here. It looks just like a loft.
Sašo: It's a secret compartment of our house.
Rick: With Grandma and Grandpa downstairs.
Sašo: Built-in babysitters. This is our living room. This is where we spend rainy afternoons.
Rick: This is very comfortable and very spacious, really. Above Grandma and Grandpa's… now, I still can't get over that, because — I've got to say — in America, there is a stigma about people in their thirties still with their mom and dad, raising their kids upstairs.
Sašo: That's the usual thing around here.
Tina: Very typical.
Sašo: Alright, and this is the little kid's room…
Rick: Anže.
Sašo: …Anže is his name. The room is soon going to be shared by another baby, which is due in four and a half months.
Rick: In four months?
Sašo: We are almost halfway through.
Rick: Anže will have a roommate. This is great.
Sašo: Yeah, ha ha ha.

While the two families live separately, they share lots of dinners. And the hearty local food provides a good foundation for a lively conversation.

Rick: This is very interesting to me, because this is food I would think about in Germany or Austria or in the north. But, we're right in the middle… Italy, Germany. And how does that affect your culture?
Sašo: We are punctual when we need to be punctual. We will be on schedule when we need to be on schedule. But we can also be really laid back, relaxed, mellow about certain things.
Rick: If you're angry what would… ?
Sašo: We will curse. Seriously.
Rick: In Slovene?
Sašo: Absolutely.
Rick: What would you tell me?
Sašo: I would say, may you get kicked by a horse.
Rick: That's your worst?
Sašo: …or "three hundred hairy bears." This would be just about our worst.
Rick: Three hundred hairy bears?
Sašo: Yes.
Rick: That's worse than "Your mother wears army boots."

Rick: Gorazd, you grew up with Tito. Are you nostalgic about Yugoslavia?
Gorazd: No, no. Not nostalgic, because now we live better than in former Yugoslavia. There in former Yugoslavia, there were good things and also bad things. Maybe one of the better things was for young families, because they can get apartment, they can get job. Bad things about Yugoslavia was maybe because there was no good stimulation for good workers. For good or bad workers, the wage was all the same.
Rick: So, Yugoslavia was good for bad workers.
Gorazd: Good for bad workers, yes.
Rick: And today, capitalism has changed — good for good workers.
Gorazd: It's good, yeah.

There's really no better way to get to know a place, than enjoying a meal with a local family. 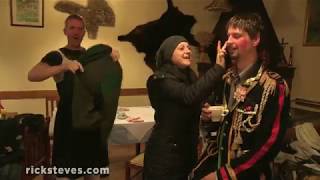