The National Museum covers the country’s prehistoric beginnings with artifacts from the Bronze Age, roughly 1500 BC, when people worshipped the sun and believed in the afterlife. Around 1000 BC, priests wore horned helmets and played lur horns in ceremonies.

The National Museum traces the story of this land from its pre-historic beginnings.

Denmark's Bronze Age civilization dates back to 1500 years before Christ. This elderly woman — whose coffin carved out of an oak tree was preserved in a peaty bog — must have believed in an afterlife. She took her precious possessions with her. Still wearing her original wool blouse, she packed a finely carved horn comb, bronze jewelry, and a dagger.

Like her Mediterranean contemporaries, she would have worshipped the sun. The Chariot of the Sun illustrates that she believed that the sun was dragged across the sky by a divine horse. This daily journey of the sun dominated Bronze Age religion.

And these Horned Helmets were worn about 500 years later — around 1000 BC. Contrary to popular belief these helmets were not worn by the Vikings. It was their Bronze Age predecessors who wore them, for ceremonial purposes, 2,000 years before Eric the Red.

Horned helmeted priests would have played these Lur Horns. These distinctive Nordic wind instruments — found in bogs all over Denmark — added atmosphere to Bronze Age ritual. While 3000 years old — as old as the Iliad and the Odyssey — they still play. Even back then, the Danes had a flair for design. The ornamental disc is a sun symbol — perhaps as if these horns played the magical music of the sun. 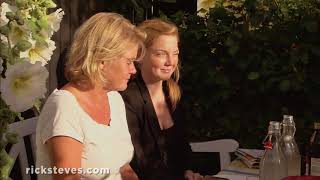