Croatia’s Dubrovnik and War of Independence from Yugoslavia
Share

Dubrovnik’s sturdy walls kept out the Ottomans in the 1400s, but could not protect the town from Yugoslav bombs in 1991 after Croatia declared its independence. Croatia won the war, Dubrovnik’s damage was repaired, and tourists have returned.

Through clever diplomacy, Dubrovnik managed to maintain its independence until the 1800s. Through all those centuries, the Republic of Dubrovnik invested mightily to withstand any siege. They stockpiled grain in huge underground silos and piped in water from nearby mountains.

Dubrovnik’s single best attraction is its mighty wall, offering an unforgettably scenic mile-long stroll. While constructed over many centuries, today’s impressive fortifications date from the 1400s, when they were beefed up to defend against the Ottoman Turks.

While the walls worked fine against the Turks five centuries ago, they couldn’t protect the city from modern artillery. In 1991, after Croatia declared independence from Yugoslavia, the Yugoslav army shelled the city, damaging about two-thirds of its buildings.

Brighter newer tiles mark the houses that were hit and roofs that had to be replaced. These roofs were rebuilt using the same materials as the original ones. When the war engulfed this beloved city, the world paid attention. Today, as the new tiles are fading, so are the scars of that war.

We’re staying at a small guesthouse at the top of town. Throughout Croatia, sobe — that’s rooms for rent in private homes — are a much better value than big hotels.

Ours is run by Pero.

Rick: Pero, tell me about the war here in Dubrovnik.
Pero: Well, it was a very difficult time. So, Dubrovnik was under siege for eight months… so no water, no electricity, no food, medicine…And all the refugees from all the smaller places around, they came to Dubrovnik, hoping they were not there to do such things to Dubrovnik.
Rick: What happened to this house, specifically?
Pero: Well, this house was hit by two grenades from mortars, right? So this is what I find in my, on top of my house. Two of those exploded. So the house was hit… no tiles — so I could see the sky. There was no roof on the house.
Rick: And this house… ?
Pero: This house is more than six century old. And it’s in my family for more than 200 years. So, I took some loans from the bank, and I decided to rent it, like a guesthouse.
Rick: So now it’s the tourists have come back and you have a good business.
Pero: Yes.
Rick: And a beautiful house. Congratu — the quality — the craftsmanship — is just beautiful here.
Pero: Thank you very much.

With the war in the past, the tourists are back. To escape the crowds, hit the beaches during the heat and crush of midday. Go for a dip near — or far — from the Old Town. Wherever you choose, you’ll swim in the shadow of one of Europe’s finest fortified medieval cities. 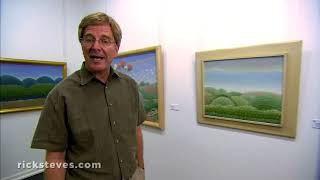 The Croatian Museum of Naïve Art