The Normans, who invaded England in 1066, established control partly by building magnificent cathedrals like Durham’s (in the "Norman," or Romanesque, style). Dedicated to St. Cuthbert, this 12th-century pilgrimage church plays a vital role in the community today.

Driving further east we reach the city of Durham. With its famous cathedral, built by the Normans, it adds another layer to this region’s history.

As their empire fell in the 5th century, the Romans abandoned Britain to the barbarians. After centuries of relative chaos, a central government was re-established by the Normans who invaded from France in 1066. Along with stability and a capable rule, Normans brought with them the prevailing European style of architecture, Romanesque. Here in England, the style was named for the people who brought it — Norman.

Before visiting the church and learning about Norman architecture, we'll get the lay of the land. A sharp bend in its river protected medieval Durham — providing a moat on three sides. Today the river seems to protect the city only from the modern world. From this riverside path — much enjoyed by residents for a peaceful little get-away — we can ponder the cathedral as approaching medieval pilgrims once did.

The tangle of streets leading to the cathedral, while retaining its medieval atmosphere, is lively. The city hosts the country's third oldest university. Along with the student vibe, Durham also feels blue collar because of its historic connection with the mining industry.

For nearly a thousand years, pilgrims have set their sights on this… the Durham Cathedral, standing like a mighty fortress. Built around the year 1100 to house the much venerated bones of the great missionary monk, St. Cuthbert, it offers perhaps England‘s best and purest look at Norman architecture.

The architecture is unusually harmonious because the church was completed in just 40 years and survives essentially unaltered. Round arches and zig-zag decorations are text book Norman style. Stroll down the nave to the center. Gaze up at one of the highest bell towers in Europe.

When the Normans conquered the Saxons here in England back in the 11th century, they brought with them more than just their architecture. They brought a whole new order. And this mighty church, way up here in the North, was more than a place of worship and home for Cuthbert's bones. It was an unambiguous political statement to both the conquered Saxons and to the Scots further north. The Normans were here to stay.

Grand medieval churches and the art that fills them are a reminder that monks like Cuthbert were the intellectual candles who helped keep scholarship flickering through the Dark Ages. Later, that knowledge strengthened the Church and made wonders like the Durham Cathedral possible.

While this fresco of the saint dates from the 12th century, Cuthbert died way before that — in the year 687. The cathedral displays the saint's coffin and treasures that were buried with him. This fine Saxon sash was embroidered with gold thread and silk. And this is the exquisit cross that this leader of the early Christian church in northern England wore.

For a better understanding of the cathedral and its saint, we're joined by cannon Stephen Cherry.

Rick: But the cathedral is called the Shrine to Cuthbert. What does that mean to you?
Stephen: It’s really remarkable that we have the body of the saint from so long ago in our custody here as it were. So what we do is I think we kind of bond with Cuthbert’s spirit. We bond with that deep sense of history and tradition that Cuthbert represented. He was a man of profound spirituality but also very serious human struggle. Being close to St. Cuthbert means for me getting closer to Jesus Christ because of understanding the way in which Jesus worked through the life of this man albeit he lived sovery many centuries ago…
Rick: For 1000 years pastors and priests and ministers like you have been serving the needs of this community. That must be kind of an inspiration in itself.
Stephen: It’s a very inspiring thing. You think of all those years, 500 years before the Reformation, when the mass was being celebrated. Then a little hiatus and then the post-Reformation church, that too was saying the mass, it was celebrating holy communion, the daily offers here everyday and we’re still part of that.
Rick: When you walk through the cathedral there’s a feeling that it’s vibrant and alive.
Stephen: It absolutely is vibrant and alive. We’re completely committee to welcoming all who come. We’re entirely committed to engaging with the arts and celebrating the good things of life. That freshness of mission is integral to the life of the cathedral.

As if to stress that point, the medieval Durham cathedral is enlivened with art from our generation and from its community. This window gives us a striking overhead view of the Last Supper. And this one celebrates the church's 1000th birthday with a sweep through local history and industry from mining to farming. 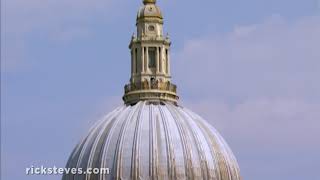 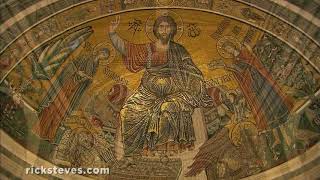