We’re entering the historic core of London: the one-square-mile district locals call simply, “The City.” While only a few thousand people actually live here, its 9-to-5 crowd numbers half a million. This is Britain’s Wall Street, thriving with big-time commerce and packed with banks.

The City is also packed with history. This monument commemorates the devastating fire of 1666, which started here and burned down nearly all of London. These reliefs show in heroic terms how city leaders came together determined to rebuild. The great architect Christopher Wren was chosen to spearhead the project. And the city that rose from the ashes of that fire was decorated by the Wren-designed spires of some 50 churches. Christopher Wren spent four decades — the rest of his life — working on his grand vision.

The centerpiece: this mighty cathedral, St. Paul’s. Today, it’s the symbol of London’s resilience: its rise from the Great Fire, and of London’s survival of the Blitz of World War II.

The church is one of the world’s biggest. Wren accentuated its spaciousness by the lack of decoration. Notice the simple ceiling… and the clear glass lighting everything evenly. Today, only the west end of the church keeps Wren’s original vision. In the 1800s, Queen Victoria called St. Paul’s “dim, dingy, and ungodly,” so the east end of the church was then slathered with Victorian bling…beautiful Victorian bling.

While the church’s survival in World War II was almost miraculous, the apse of the church did take a direct hit, and was destroyed. Today it’s rebuilt as the American Memorial chapel to honor our nation’s contribution to the defense of Britain. We see Jesus, Mary, and… George Washington. The American iconography includes stars, stripes, and eagles. And hiding behind birds and plants native to the USA, it’s a US rocket, circa 1958, shooting up to the stars.

The British are grateful to their WWII allies. The Roll of Honor lists the 28,000 American servicemen based in Britain who gave their lives.

Climbing the dome is like climbing a 30-story building… with no elevator. And the reward: a commanding view of London.

Christopher Wren spent nearly half his life working on St. Paul’s. At age 75, he got to see his son crown his masterpiece with this golden cross.
A short taxi ride away is Westminster Abbey. This most historic church in the English-speaking world is where kings and queens have been crowned and buried since 1066. While it was first built in the 11th century, much of what we see today is 14th century. When there’s a royal wedding, the world looks on as, amid all this splendor, thousands of Britain’s glitterati gather under these graceful Gothic arches.

The centerpiece is the tomb of Edward the Confessor, who founded the abbey. And, surrounding Edward, are the tombs of 29 other kings and queens. This is the tomb of Queen Elizabeth I. Her royal orb symbolizes she was queen of the entire globe.

The abbey is filled with the remains of people who put the Great in Britain — saints, musicians, scientists, and soldiers. For lovers of English literature, strolling through Poets’ Corner can be a pilgrimage in itself.

King Henry VII’s Lady Chapel, with its colorful windows and fanciful banners, has the festive air of a medieval pageant. The elaborate ceiling is a fine example of fan vaulting — a style that capped the Gothic age. At the far end, a wall of modern stained glass marks the Royal Air Force Chapel. It honors the fighter pilots of all nations who died defending Britain in 1944.

With saints in stained glass, heroes in carved stone, and the remains of England’s greatest citizens under the floor stones, Westminster Abbey is the national church and the religious heart of England. 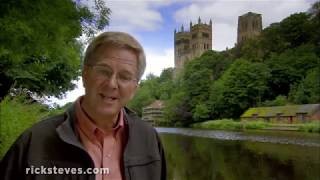