Across Europe, national pride shows through in events and traditions: folk songs (Bulgaria, Romania), national dances (waltzing in Austria), Changing of the Guard ceremonies (from London to Monaco to Athens), and, of course, Independence Day (France).

Festivals help maintain a culture’s identity. Pageantry stokes local, regional, or national pride. And, while annual festivals are the big events, this celebration of culture can be just as rich on a smaller scale.

Traveling through Europe, any day of the year you can experience a festive spirit powered by music that simply makes daily life more celebratory. Beloved musical traditions have long helped embattled cultures to assert their identity, to sing and dance their way through centuries of challenges. Like the Roma people here in the Czech Republic, and throughout Europe.

People everywhere grab their folk instruments, pull on their national costumes, and gather together to celebrate their culture. Here in Bulgaria, dance troupes in colorful dress whoop it up Slavic-style.

And people celebrate what makes them unique as a nation. In this small Bulgarian town, in a land that uses a different alphabet than most of Europe, the entire population is out on the street for the annual celebration of their Cyrillic script.

Patriotic hearts beat stronger with the sounds of each nation’s unique music, such as klapa music in Croatia…or rousing folk songs in Romania.

In Austria, cradle of so much classical music, waltzing is the national dance, and hearts beat in three-four time.

In the Czech Republic, what could be more festive than listening to lively folk music while enjoying some of the best beer in the world with local friends. It’s a great way to celebrate a good day of travel wherever you are.

In university towns throughout Spain, roving bands of musicians, like medieval troubadours, are a festival just waiting to happen. These bands are generally students available for hire. Here in Salamanca, a folk group serenades a woman preparing for her wedding.

Colorful traditions are often rooted in a desire to stoke patriotism. Many European countries, like Norway, are democracies but still have constitutional monarchs. And they celebrate their royal heritage with a stirring Changing of the Guard ceremony — like this one at London’s Buckingham Palace. These martial spectacles, like here in Sweden, are holdovers of a time when this coordinated show of force helped dispel any thoughts of attack or revolution against the crown.

In Greece, fierce (if gaily clad) soldiers remind their citizens of their hard-fought independence with rituals at the national capital.

Even though Europe may be unified as one, each country has its own national pride, and national holiday. The most famous of these celebrates the violent end of a monarchy, and the advent of modern democracy in France.

France’s national holiday is July 14: Bastille Day. And that means a big party as all of France indulges in a patriotic bash. In Paris that means lots of flags, and lots of parties. Everyone’s welcome to join in.

Like towns and villages all over the country, each neighborhood here hosts parties until late into the night. The local fire department’s putting on this party, so I guess it doesn’t matter if the fire marshal drops by.

Each year, crowds pack the bridges and line the river, as a grand fireworks display shares the sky with the Eiffel Tower. 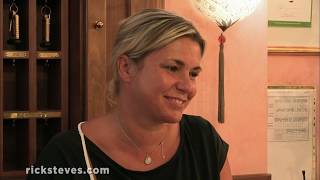