Every year on July 2 and August 16, the medieval town of Siena hosts a frenzied horse race on the main square. Heralded by pageantry, it’s 90 seconds of craziness as 10 neighborhoods compete to win the Palio banner and bragging rights…until the next Palio.

Across Europe, festival traditions go back centuries and are filled with time-honored pageantry and ritual. Entire communities hurl themselves with abandon into the craziness. There’s no better example than here in Italy: Siena’s Palio.

In this gorgeously preserved Tuscan hill town, the Middle Ages seem to survive in the architecture. Its towering City Hall tower fronts an elegant shell-shaped main square: Il Campo. While its streets are peaceful they contain a lively legacy of civic pride and independence. And twice a year that spirit shows itself in a crazy horse race as it has for five centuries.

The city is divided into 17 neighborhoods (or “contrade”). These are autonomous, competitive, and filled with rivalries.

In this densely populated city, most of the year the contrade are almost indistinguishable. One small piazza or street looks much like the next, but as the Palio approaches the battle lines are drawn. The distinctive flags and colors of each contrada line the neighborhood showing their namesake mascot — like turtle, eagle, dragon…and a fierce-looking dolphin.

All year long, citizens prepare. Women lovingly stitch vests and banners. Neighborhood fathers coach kids in drumming and flag throwing. Any time of year, if you hear drumming, check it out for a taste of the Palio to come.

And twice a year — each July and August — the entire city readies itself as 10 of the 17 neighborhoods — chosen by lottery — prepare for the big race. Its central square, Il Campo, is transformed into a medieval race track. Tons of clay are packed atop the cobbles, padding is added to the treacherous corners, and bleachers and railings are set up in anticipation of the big day.

While the horse race only lasts only a couple of minutes, for the Sienese the Palio is a way of life — for many it’s a philosophy. Locals joke that in Siena “you’re born, there’s the Palio, and then you die.”

While the jockeys — usually from out of town — are hired hands, the horses are the stars. Each neighborhood gets its horse through a lottery. They’re then adopted and showered with love — respected as if special neighborhood citizens. They’re groomed and washed and housed in stables right in the city center.

In the days leading up to the race, they’re frequently paraded through the streets for their admiring fans.

As race day approaches, processions break out across the city. Locals belt out passionate good luck choruses. With the waving flags and pounding drums, it all harkens back to the Middle Ages, when rituals like these boosted morale before battle.

Each contrada marches into Siena’s ornate cathedral. The centerpiece of the parade is the actual palio — that’s the famed and treasured banner — lovingly painted and featuring the Virgin Mary to whom the race is dedicated. The church is thronged, as all the neighborhoods wave their stirring flags in unison to honor the palio’s procession to the altar.

Here it’s blessed as the crowd looks upon it reverently. Soon it will be awarded to the victorious contrada. With the horses and jockeys chosen, and the palio blessed and waiting for the winner, competing neighborhoods gather for big community dinners that last well into the night. Each banquet is beautifully situated in the heart of the district. It’s a multigenerational affair, with old-timers, the young, and the very young. There are rousing choruses, all cheering their contradas…and little ones soaking up the centuries-old traditions. Even if I don’t fully understand what’s happening the excitement is contagious — and the wine is delightful. I feel privileged to participate in a scene that’s changed little over the centuries.

On the day of the race those honored to represent their contrada put on elaborate medieval costumes and armor. This requires many assistants, who not only help fit the clothing, but make sure it looks just as it did centuries ago.

In full regalia the contrade then process to the neighborhood church, where there’s a colorful flag ceremony…followed by a full-throated singing of the contrada’s hymn. And finally, the traditional blessing of the horse by the priest. “Go — and return victorious,” says the priest.

Then — you guessed it — there’s another procession, with more drums and flags as each contrada marches through Siena, eventually flowing together at the cathedral — where, before the bishop, they showcase their passion and talents.

After all have gathered at the cathedral, there’s one last grand parade through the canyon-like streets. With drums thundering the people crush to join the scene. The town converges on its main square.

And then, with what seems like all of Siena packed into the Campo, it’s time for the race. Bleacher and balcony seats are expensive but standing room with the masses in the square is free.

A cart pulled by oxen, carrying the coveted Palio banner, enters. This only increases the crowd’s anticipation.

Then, 10 snorting horses and their nervous riders line up to await the start. The jockeying includes a little last-minute negotiating — it’s…complicated. Silence takes over. Once the rope drops, there’s one basic rule: There are no rules. They race bare-back like crazy, while spectators go wild.

With nonstop spills — and thrills — life in Siena stops for these frantic three laps…just about 90 seconds.

…And Lupa — the she-wolf district — wins.

When the winner crosses the line, one-seventeenth of Siena — the prevailing she-wolf neighborhood — goes berserk. Tears of joy flow; people embrace. The jubilation is over the top for both the winners, and for the many neighborhoods joyously celebrating their rival contrada’s defeat.

The happy horde thunders through the streets and up to the cathedral. Once there, they pack the church and the winning contrada receives the coveted Palio. Champions…until the next race. 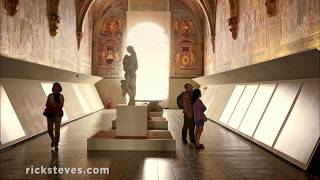 Siena: A Gothic Powerhouse and a Joy Today