The sleepy Mosel River contrasts the mighty Rhine. Its Burg Eltz is the region’s best-preserved castle (with a rare furnished interior), providing the perfect opportunity to learn about feudalism in medieval Europe.

The Mosel moseys 300 miles from its source in France — where it’s called the Moselle. This stretch, just before it meets the Rhine, is most interesting.

The Mosel is the Rhine’s peaceful little sister — with romantic villages slipped between steep vineyards and the river, lots of friendly B&Bs, and a sprinkling of castles. Boat, train, and car traffic here is a trickle compared to the roaring Rhine.

The town of Cochem is the main tourist center — easily accessible by train, with a cobbled old center and a delightful waterfront promenade. It has a storybook castle — but Cochem Castle is actually a 19th-century reconstruction, more fanciful than authentic.

For a more real castle experience, we’re visiting Burg Eltz. Hiding out for 800 years in the mysterious forest, it’s been left amazingly intact. This is my favorite castle in all of Europe.

Visitors assemble in the central courtyard — the common ground of a tiny fortified community. From here, groups are guided through the castle.

The place is truly authentic — furnished throughout basically as it was 500 years ago. That’s rare in castles. Thanks to smart diplomacy and clever marriages, Burg Eltz avoided wars and was never destroyed. It’s been in the Eltz family for eight centuries. The present countess loves flowers and adorns each room with fresh bouquets weekly.

The nobles — from three branches of the Eltz family, who shared this fortification — met and worked out their problems here, in the Grand Gallery. The decor had meaning. Since the jester could say anything to the king, this relief reminded people they should talk freely. But the Rose of Silence reminded them that what’s said in here should stay private.

The master bedroom was finely decorated and as comfortable as possible back then. It came with a toilet — one of 20 in the castle, each flushed — occasionally — by rainwater.

This bed is about 500 years old. It’s high because hot air rises. The canopy is romantic now, but back then, it was practical — it kept the heat in and the bugs out.

The castle’s 500-year-old wall paintings help you imagine who lived here. In the bedroom, the theme — a festival of phallic and fertility symbols — hints at a playful and lusty world.

Burg Eltz has a lacy little Gothic chapel. The paintings and stained glass are also 500 years old. The chapel was on a lower floor. Because it was disrespectful to live above the house of God, the chapel juts out, cleverly filling a bay window.

All these castles are remnants of Europe’s feudal system. Feudalism was the social structure that came out of the chaos and fragmentation that followed the fall of Rome.

The feudal system was based on a series of agreements between a hierarchy of landlords. Basically, a big landlord granted land to a less powerful guy in return for service and loyalty. To put it into feudal terms, a lord granted a fief — that’s land — to a vassal — that’s a less powerful lord — in return for fealty (or loyalty). From the king on down, one man’s vassal was another man’s lord. The feudal hierarchy — all these layers of lords — rested upon the backs of the landless peasant or serf. And the serfs who surrounded these castles had no real options in life but to work the land in return for protection and enough food to survive. 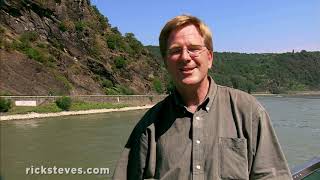