Learn about the challenges of medieval trade on the mighty Rhine — from robber barons to the legendary seductress Loreley — and compare it with modern-day navigation. Explore the once-powerful Rheinfels Castle and riverside village of Bacharach.

While the Rhine is over 800 miles long, the 36-mile stretch from Mainz to Koblenz is by far the most interesting. And that’s what we’re exploring. It’s no coincidence that the great medieval sights of Europe lie along the important trading routes like the Rhine. It took big money to build the structures that we travelers would marvel at centuries later.

Since ancient times, the Rhine has been one of the world’s busiest rivers and this region’s major trading route. Today there’s a steady flow of barges with thousand-ton loads, while busy train tracks and highways line both banks — all under the watchful eye of once-mighty castles.

Many of the castles were “robber-baron” castles, extortion stops — built by petty princes and two-bit rulers, back when there were 350 independent little states in what is today Germany.

The shipshape Pfalz Castle — actually built midstream — effectively taxed river traffic. Its town grew rich as the castle raised its heavy chains across the river when boats came, and lowered them only when the merchants had paid their duty.

Along this stretch, there were customs stops like this about every six miles. No wonder merchants were early supporters of the creation of larger nation-states.

In the Middle Ages, emperors, popes, and these little princes were jockeying for power around Europe. In Germany, the emperors controlled the princes. But, in the 11th century, the pope established his power over the emperor. This allowed the little German princes to go wild and build all these castles. That’s why most of the castles along the Rhine date from this era. A couple hundred years later, as the emperor began reasserting his control over the princes, these castles saw action.

While the castles survived these battles, most were destroyed later by the French, because they feared a strong Germany and they felt the Rhine was the logical border between the two countries. In the Romantic Age — the late 1800s — medieval things were in vogue, and many of the ruins were rebuilt. Today the Rhine castles are enjoyed as restaurants, hotels, hostels, and museums.

And travelers cruise the river just to castle-watch. Tour boats come and go about hourly. Various lines each have their own docks and advertise their own schedules. Buying tickets from a kiosk before boarding, tourists can put together their own hop-on and hop-off tours of this most romantic stretch of the Rhine.

Along with transporting camera-toting tourists, the Rhine moves a steady flow of cargo to the world’s biggest port — Rotterdam — which waits at the mouth of the river.

Barge workers are almost a subculture. Many own their own ships. The captain and his family live in the stern — car parked on the rooftop. The crew lives in the bow.

The powerful Rhine has long been treacherous to navigate. Boats generally pass on the right. Since downstream ships can’t stop or maneuver as freely, upstream boats are expected to do the tricky do-si-do work. Large triangular signals, posted before troublesome blind bends in the river, warn of oncoming ships.

Each triangle covers a segment of the bend — the lowest triangle being nearest. They warn of approaching ships. If the bottom side of a triangle is lit, that sector is empty. But if the left side is lit, there’s an oncoming ship in that sector.

The most dangerous bend in the river swings around a rocky bluff called the Loreley. Because of reefs just upstream, many ships never made it safely past the Loreley, and the rocky cliff remains steeped in myth.

Sailors blamed their misfortune on a Fräulein so wunderbar her long blonde hair almost covered her body. This legendary siren flirted and sang her distracting song from this rock.

Just downriver from the Loreley is the pleasant town of St. Goar, founded in the sixth century by a monk famous for his hospitality. According to legend, early sailors would stop here for a rest and a prayer of thanks after surviving the seductive and treacherous Loreley.

Today, St. Goar is a tourist town. Its only hazard: streets of shopping opportunities. This shop brags it has the world’s largest free-hanging cuckoo clock. This one specializes in steins.

Rheinfels Castle sits like a dead pit bull above St. Goar. Once the biggest and mightiest castle on the Rhine, Rheinfels rumbles with ghosts from its hard-fought past. While it withstood a siege of 28,000 French troops in 1692, the French finally destroyed it a century later.

Today this hollow but fascinating shell offers your best hands-on ruined castle experience on the river.

During the pre-gunpowder glory days of castles, defenses were better than offenses. The best way to beat a castle like this was a long, boring, starve-’em-out siege. Therefore, a castle needed to be well stocked and self sufficient.

Imagine this courtyard 500 years ago — it had a bakery, pharmacy, herb garden, livestock, a well — even a brewery. During times of peace, a couple hundred people lived here. But during a siege, as many as 4,000 people would pack within these walls, hoping to have enough provisions to outwait their attackers.

In its heyday, these walls — whitewashed and gleaming in the sun, flags flying high — must have exasperated attackers camped outside for so long.

If you miss your boat, hourly trains connect riverside towns quickly and cheaply. The historic town of Bacharach makes a fine home base for exploring this region.

Herr Jung, Bacharach’s retired schoolmaster, is a good friend of mine. Over the years, he’s enjoyed showing my tour groups around town.

In its heyday, Bacharach was fortified by a great wall, which you can still hike on above the town today. At one time, there were 16 towers along the wall. Six of them survive. The wall extended all the way to the castle.

Rick: So this was a very important city?
Herr Jung: But we had big problems back then, because we had 15 fires and the plague. Half of the population died away by the plague, and we had the Thirty Years’ War, and Bacharach was occupied eight times — by the Swedish, by the Spanish, by the French. Eight times, ja? Then we became a sleeping beauty from 1650 to 1850. For 200 years.
Rick: Two hundred years, nothing happened.
Herr Jung: Nothing changed.

Then, in the mid-19th century, things changed. Romantic artists and writers were charmed by the Rhineland’s mix of past glory, rustic poverty, and rich legend. They discovered this area — putting it on the grand-tour map as the “Romantic Rhine.” Victor Hugo stood here and wrote of Bacharach’s ivy-covered ruined chapel — “a magnificent skeleton puts its silhouette against the sky.” 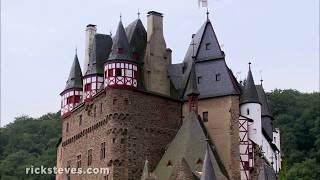