Güzelyurt, Rural Turkey, and Visiting with an Imam
Share

In the remote town of Güzelyurt, we visit with a local family, sipping tea and sharing pictures and stories in their home. At the mosque, we talk Islam with an imam, who explains some Muslim beliefs and worship practices.

We’re heading further south away to the remote and untouristy town of Güzelyurt.

The ancient town seems one with the rock out of which it was carved. Sixteen centuries ago, monks built monasteries into the cliff side. Erosion has driven most of the residents here to more stable dwellings, but some remain, and exploring the town you appreciate the tenacity of its people.

Though seemingly abandoned, there’s still life in the old town. Residents somehow eke out a living from its crumbling terraces and neglected gardens. People do their humble chores as if stubbornly refusing to give up on their town.

This is the kind of discovery I love to feature in my guidebooks. It’s a perfect “back door.” Almost no tourism, lots of history, plenty of character.

Today, like Turkey in general, Güzelyurt is Muslim. But for centuries, Christians worshipped here, and the city has an interesting connection with Turkey’s neighbor to the west, Greece.

Until the early 20th century, Greece and Turkey were both part of the Ottoman Empire. There were Muslim communities in Greece, and Greek Orthodox communities here in Turkey. Like many Turkish towns, Güzelyurt was once a Greek town. Then in the 1920s, they had a huge population swap — most Christians here were moved to Greece, and Muslims there were sent to Turkey.

That’s why Güzelyurt’s historic church is now a mosque. Today its single minaret indicates that this is a valley where the people call God “Allah.” Above that 1,600-year-old church are Selçuk arches, Ottoman facades, and on the horizon gleams the tin dome of the main modern mosque.

The market square is the heart of Güzelyurt. It’s busy with people enjoying petite glasses of sweet çay and the happy clatter of backgammon dice.

An easy way to have fun with locals is over a game of backgammon — a daily treat for me anywhere in Turkey. If you don’t know how to play, it’s no problem. If you pause, someone’ll likely move for you.

And my friendly opponent, Kadir, is taking us to meet his family. Greetings are warm but formal. As is the norm in Muslim households, leave your shoes at the door. The eldest gets the most respect. A splash of cologne leaves us refreshed and clean. Tea making is given great importance and done with pride. And good luck if you want it without sugar. As things loosen up, I share pictures of my children. The daughters add to the fun, and we enjoy a little Turkish fashion show. And the grandfather entertains with tales of 30 years of shepherding. For me, intimate encounters like these are as rewarding as visiting the great museums.

Before we leave Güzelyurt, we’ve got an appointment with the imam back at the old church. Originally the Church of St. Gregory, this was first built in AD 385. While Christians worshipped here 1,600 years ago, today it functions as a mosque. The imam has agreed to a short interview. “Imam” means “teacher”; he’d be the equivalent of a Christian pastor.

When the imam calls the people to pray, he’s saying “God is great. There is one God and Mohammed is his prophet.”

This global wave of praise races as fast as the sun five times a day across Islam, from Malaysia to Morocco and beyond. Throughout Islam, fundamentalism is on the rise. Many Turks see this as a threat to their democracy. Modern-minded Turks, while still Muslims, want their government to preserve the separation of mosque and state.

In fact, a constitutional obligation of Turkey’s military is to overthrow its own government if ever it becomes a theocracy. It’s a complicated issue, and there is a rising tide of fundamentalism here among Turks. But the people I’ve met seem determined to maintain the secular ideals of Atatürk. 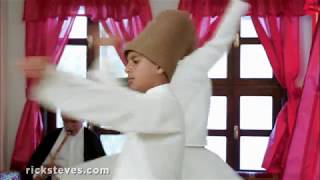