In traditional Konya, we explore the shops and back streets. Mevlana, a 13th-century Muslim philosopher who preached a message of love, was born here. His followers are whirling dervishes, who pray by spinning in a meditative trance — and are mesmerizing to watch.

Today’s Turkish culture is shaped by a complicated history. Ancient Greece, and then Rome from the west, swept in and established a culture that led to the Byzantine Empire. Eventually, Muslim Selçuks from the east ended Christian Byzantine rule. Then the Ottomans stormed in and ruled until World War I, when the father of modern Turkey, Atatürk, established the Turkish Republic. While the Republic is secular, the vast majority of Turks are Muslim.

Turkey is filled with over 75 million people. They come in many ethnicities and after thousands of years of exposure as a crossroads between Asia and Europe, it’s quite a mix. Faces tell the story.

The landscapes of this vast country are as diverse as the people it supports. Distances are long, traffic is sparse, and the roads are great.

This is Konya, one of the most conservative and religious towns in western Turkey. For many Turks, this town’s a bit too orthodox, but I’m looking for all sides of Turkey, and Konya is a fascinating stop. This city of a million people is one of the oldest in the world, with known settlements dating back 8,000 years.

The city has an illustrious history. Back in the first century, when Konya was called “Iconium,” the apostle Paul visited several times. And during its heyday in the 13th century, Konya was the capital of the Muslim Selçuk Empire.

Strolling the streets, you experience the contrasts of the old and the new. It’s a university town with a fine park — ideal for young couples enjoying a little private time.

And wandering into its back streets, much of the traditional side of Turkey survives, and the orthodoxy of Konya becomes more apparent. For instance, nearly all women wear scarves. The huge produce hall is busy with people picking up locally grown fruits and vegetables.

In the hubbub of the crowded streets, browsing can be endlessly entertaining. Boys with trays of tea (or çay) scurry from shop to shop. Travelers have a richer experience when they make a point to connect. Drink some tea.

The barbershop is still a great way to catch up on all the gossip. The finale: spanking with a flame…leaving you smooth as you’ve ever been.

And poking into unusual shops, you’ll be surprised at what you may learn. Turns out, this place is a one-stop shop for shepherds.

Rick: So, I’m a shepherd, sitting here in the elements.
Lale: Lunchbox!
Rick: Ah, this is my backpack. I have to have a flute. Perfect. Do you take credit cards?
Lale: [Interprets]
Rick: OK! It’s a good deal.

Konya is the home of Mevlana, also known as Rumi, a 13th-century Muslim philosopher who preached a message of love. His tomb is the focus of many pilgrims visiting from throughout Islam.

Under beautiful domes, the tombs of Mevlana, his family, and earliest followers are venerated. Pondering the tomb of their great teacher, pilgrims remember his message which focused on connecting the powerful love of God with us on Earth. Mevlana said, “I looked for God in all the temples, mosques, and churches, and found him in my heart.”

The adjacent museum explains Mevlana’s teaching with a display of significant writings, books of poetry, and historic copies of the Koran.

Mevlana attempted to distill the message of the Koran into a pure and simple anthem of love. His teaching was a mystical interpretation of mainstream Islam, and his followers, called dervishes, have dedicated their lives to living out that Mevlana, or Rumi, philosophy.

Mevlana’s dervishes whirl themselves into a meditative trance. While raising one hand toward heaven, the other toward earth, they symbolically plant one foot upon the Koran, the Muslim word of God, while the other walks through all the world. One hand rises up, as if to accept the love of God. The other goes palm down, showering the love of our creator on all of humanity. As he whirls, the dervish transcends our material world…becoming a conduit between the love of God and his creation.

Wherever you travel in Turkey, you’ll find opportunities to witness this mesmerizing form of prayer. It’s a good example of the many facets of Islam, a powerful religion that perhaps we can take the initiative to better understand. 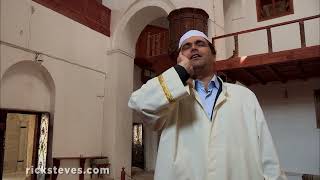