Israelis and Palestinians struggle to share land they each claim as their historic homeland. A visit to the West Bank helps us understand the Palestinian perspective. Many Arabs hope that this area will one day be an independent Palestinian state, with East Jerusalem as the capital.

In the Middle East, Israel and Palestine share the land west of the Jordan River. Israel is the predominantly Jewish State, while Gaza and the West Bank are Palestinian — mostly Muslim and Arab.

While there are no easy answers, actually coming here and learning first-hand is the best way to gain context and understanding. I can learn about Islam on the carpet of a mosque, get tips on roasting coffee, and gain insight into how a proud and independent young woman chooses to cover her head. People from all walks of life are happy to talk, the welcome’s warm, and travel here is richly rewarding.

The Muslims and Jews who call this region home share a family tree that goes back nearly 4,000 years. That’s when the patriarch, or prophet, Abraham had two sons. From Isaac came the Israelites, and Ismael spawned the Arabs.

This ancient ethnic mix is complicated by religions. Israelites were Jewish. Christians worship Jesus, a Jew who brought his own message. And today, most Arabs here are Muslim — a religion that arrived much later with their prophet, Mohammad, in the seventh century.

Throughout the centuries, this region endured waves of conquerors, from Roman legions to Christian Crusaders to Muslim Ottomans. In the 19th century the entire area was called “Palestine” — a name that goes back to Roman times. A century ago, Arabs vastly outnumbered Jews. That changed in the 20th century with the creation of the state of Israel. Today, the combined population of Israel and Palestine is about 12 million — roughly half Jews and half Arabs. In 2012 the United Nations recognized Palestine as a state.

The epic stories of the world’s three great monotheistic religions have played out on this tiny piece of real estate. It’s been a difficult mix. And Jerusalem is the most contested city within this contested land. 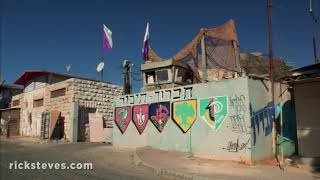