Israel is sacred ground for three religions: Judaism, Islam, and Christianity. In the Middle Ages, Crusaders tried unsuccessfully to retake the Holy Land from the Muslims. In modern times, WWII’s Holocaust led to the creation of Israel — bringing together dispersed Jews and displacing Muslim Palestinians.

For a third of humanity, Israel is, literally, holy land. And Jerusalem marks its sacred center. For Christians, this is where Jesus was crucified and resurrected. For Muslims, this is from where Muhammad journeyed to heaven. And for Jews, this is where the Temple of Solomon stood. The crossroads of three great religions, the Holy Land has been coveted and fought over for centuries.

Israel is filled with a fascinating range of sights. Jerusalem, with its dazzling dome, is alive with religious passion — Christian, Muslim, and Jewish. And cosmopolitan Tel Aviv enjoys its in-love-with-life Mediterranean beaches. Visitors ponder the fortress of Masada. Pilgrims are spiritually refreshed at the Biblical sights around the Sea of Galilee. And everybody can bob like corks in the super salty Dead Sea, the lowest place on Earth. Haifa, with its thriving, multi-cultural café scene, shows promise as Israel grapples with ongoing challenges.

In the Middle East, Israel faces the Mediterranean Sea — a Jewish state surrounded by Muslim and Arab neighbors. Today, the Holy Land, the region west of the Jordan River, is split between Israel and the Palestinian territories of the West Bank and Gaza. For our visit, we start in Jerusalem, then visit Masada, Tel Aviv, and the Sea of Galilee.

We’ll visit the West Bank — also filled with fascinating history and culture — in another episode. And the contentious issues Israelis and Palestinians are grappling with are beyond this scope of this travel show. Instead, we’ll simply enjoy and explore Israel.

This country is small — the size of New Jersey — with 8 million people. While the state of Israel was founded just after World War II, the Jewish people have a history here going back 4,000 years. Within a two-hour drive of Jerusalem you can take a sweeping tour of sites illustrating its tumultuous back-and-forth past.

Two thousand years ago, the ancient city of Caesarea was one of the mightiest seaports on the Mediterranean. It was built by King Herod (of Biblical fame) and named after its patron, the emperor (or “caesar”). Imagine this place back then, vessels loaded with spices and exotic goods setting sail for Rome.

Farther up the coast is the 12th-century Crusader town of Akko. Its walls seem to have been weathered as much by history as much as by the sea.

The Crusades were rampaging armies of European Christians who wrought havoc here. Their goal: to defeat the Muslims and put the Holy Land back in Christian hands.

But Muslim dominance returned, and in the 16th century the Ottoman Turks surrounded Jerusalem with this mighty wall.

And the 20th century has left reminders of the determined Zionist spirit that built today’s Jewish state. Pill boxes on the Golan Heights recall Israel’s commitment to holding the high ground. Lush valleys farmed by co-operative communities called “kibbutzes” recall generations of patriotic Israelis who turned the desert into orchards.

In 1947, after the Holocaust and the end of World War II, the United Nations helped found the modern state of Israel. And Jews, long dispersed across the world, returned to their ancient homeland. In the process, hundreds of thousands of Palestinians were displaced. And, to this day, both peoples struggle to find an equitable and peaceful way to share what they each consider their rightful homeland.

This process has been difficult, and both sides have suffered tragically. Around here, one man’s terrorist is another man’s freedom fighter. In the name of defense against suicide bombers, Israel has built what it calls a “security fence,” and what millions of Palestinians consider a degrading and illegal land grab.

And Israel is further asserting itself by building communities for hundreds of thousands of Jewish settlers across the West Bank border, in what Palestinians consider their territory. 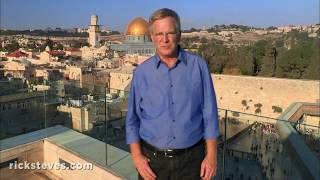