In the city of Luxor, the Luxor Temple and the Temples of Karnak were among the holiest places in all of Egypt 3,000 years ago.

The Luxor Temple is particularly dramatic at twilight. Standing in the middle of the city, it's evocatively floodlit and welcomes visitors in the evening. The towering front wall proclaims the power and greatness of the pharaohs. This grand entry was marked with a pair of soaring obelisks. Both still stand — this one here, and its sister in far-away Paris.

This holy complex was built around 1300 BC, nearly a thousand years before ancient Greece's Golden Age. Egypt's temples were not places of public worship, but sites of sacred mysteries, where priests and pharaohs huddled privately with the gods. Reliefs show pharaohs wooing the gods with rituals and offerings. While the temple may have been dedicated to the gods, it seems all the statues celebrate the great pharaoh, Ramses II. Egypt's ultimate king, Ramses ruled for 66 years — and did a lot of building. The sheer size of the complex with its forest of massive columns leading to huge squares is a testimony to Ramses' power to get things done.

Evening's a great time to visit. Under the stars, people wander, learning and dreaming — wonderstruck at the achievements of ancient Egypt.

Luxor's other great sight — another magnificent temple complex — is best enjoyed early in the morning — beating the heat and crowds. An avenue of battered sphinxes leads to the awe-inspiring main entrance, heralding the Temples of Karnak. Karnak was the most important place of worship in all Egypt.

Back when Luxor was Egypt's capital, this sprawling complex of temples was dedicated to the grandiose holy family, a trinity of gods: Amon, Mut, and Khonsu. It was built over many centuries throughout this "New Kingdom" period, when most of the great and famous kings ruled.

The Great Court is the largest single area of the complex. It was used once a year for an elaborate festival feast celebrating fertility: fertility of the land, the people, and the kingdom.

The Great Hypostyle Hall, with over 100 columns, is one of the grandest religious structures ever built. Its forest of columns represents papyrus plants — bulging stems and flowering capitals, each elaborately carved and once brightly painted.

The many columns of this vast hall once supported a stone ceiling. You can measure the architectural sophistication of a society by the distance it can span between columns. This was the best they could do three thousand years ago: The columns were fat and close together, making the gap easier to span.

Imagine what it took to build all this: They had to design it, quarry the stones, ship 'em, stack 'em, smooth 'em, carve 'em, paint 'em — all for the glory and favor of the gods. Consider the depth of the faith: this was not for the public; it was only to be seen by the royals, the priests, and the gods.

Obelisks symbolically connected earth with the gods. These are monolithic and carved out of a single piece of granite. They were quarried about 100 miles south of here, in Aswan, and then shipped down the Nile. This one's been standing here for about 3,000 years.

Like church spires and minarets, an obelisk marked a holy place. There are only about 60 in existence. A few still mark their original Egyptian temples, but more decorate the great squares of Europe — taken there through the ages by European conquerors.

As you venture farther into the complex, things get older and crescendo in religious importance. Everything at Karnak leads to a small chamber that marks the very heart of the temple complex: the Holy of Holies.

This was the most sacred spot in all of Egypt. On this pedestal sat a statue of the top god, Amon-Ra. Amon-Ra was the god of Luxor, the god of empire, and Egypt's god of gods. 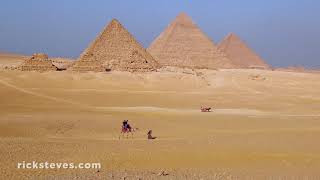