Milan is an economic powerhouse with a sense of fashion. Progressive Milan spearheaded the movement for Italian unification in the 19th century. Its main square is anchored by the grand Galleria Vittorio Emanuele II shopping arcade and the huge cathedral — walk on the rooftop amid the spires.

They say for every church in Rome, there's a bank in Milan. Italy's second city and the capital of the region of Lombardy, Milano is a hardworking, fashion-conscious, time-is-money city of nearly a million and a half.

And the city is a fascinating melting pot of people and history. Italy recently surpassed Britain in per capita income and that didn't happen because of its cute Riviera ports and Tuscan hilltowns. The economic success of modern Italy is driven by this city of publicists and pasta power lunches. Milan is Italy's industrial, banking, publishing, and convention capital.

As if making up for its blocky architecture, its people are works of art. Milan is an international fashion center with a refined taste. Window displays are gorgeous. Yet, thankfully, Milan is no more expensive for tourists than other Italian cities.

The importance of Milano is nothing new. Three hundred years before Christ, the Romans called this place Mediolanum, or "the central place." By the 4th century, it was the capital of the western half of the Roman Empire. It was from here that Emperor Constantine issued the Edict of Milan, which legalized Christianity in the year 313.

After struggling through the early middle ages, Milan rose to prominence under the powerful Visconti and Sforza families. By the time of the Renaissance, the city was called "the New Athens" and was enough of a cultural center for Leonardo da Vinci to call home.

And then came four centuries of foreign domination: Spain, Austria, France, and more Austria. In the 19th century, Milano became a center of revolution against Austrian rule and then it helped spearhead the movement for Italian independence and unification.

In the 20th century, Mussolini left a heavy fascist touch on Milan's architecture. Il Duce, himself, made grandiose speeches from these balconies.

And Milan's immense train station thunders fascism. Every time I pass through I imagine the rush the fascists must have felt on the day in 1931 when the grand renovations of this station were unveiled. It's designed to make you feel small… too small to question Mussolini and his government's right wing agenda.

Mussolini's excesses also led to the bombing of Milan in WWII. But Milan rose again. The 1959 Pirelli Tower was a trendsetter. Today, Milan is dynamic and a commercial powerhouse.

The city's centerpiece is its magnificent Duomo or cathedral…the fourth-largest in Europe.

Back in the 14th century when Europe was fragmented into countless little independent states, the dukes of Milan wanted to impress their German and French counterparts. To earn their respect, they built this huge and richly-ornamented cathedral.

Even though the Renaissance-style — with its domes and rounded arches — was in vogue elsewhere in Italy, conservative Milano stuck with the Gothic style. The dukes — thinking northerners could relate better to Gothic — loaded it with pointed spires and arches. And everything's made of marble.

The statues on the tips of the many spires seem so relaxed — like they're just hanging out, waiting for their big day. The fanciful gargoyles, functioning as drain spouts, are especially imaginative. The church is a good example of the flamboyant, or "flame like," overdone final stage of Gothic.

Step inside and you're struck by the immensity of the place. The soaring ceiling is supported by sequoia-sized pillars. Started in 1386 and not finished until 1810, this construction project originated the phrase Italians use to say "never-ending": "like building a cathedral."

Much of the brilliantly colored stained-glass dates from about 1500. So does the fine inlaid marble floor. After 500 years of wear, you can tell that the black marble is harder than the rest. A grotesque 16th-century statue of St. Bartolomeo, a martyr skinned alive by the Romans, wears his skin like a robe. You can actually see his limp feet, and dangling face. It was sculpted by a student of Leonardo, who obviously picked up his master's passion for the human anatomy.

Cap your visit with a trip to the rooftop. Walking through its forest of pinnacles and statues you enjoy great views of the church's statuary as well as of the city. And, crowning the cathedral, a golden Virgin Mary overlooks everything. La Madonnina, as she's affectionately called, is an icon of Milano.

Milan's main square is a classic European scene and a popular local gathering point. The statue features Victor Emmanuel II, first king of Italy. He's looking at the grand Galleria named for him. The words above the triumphal arch entrance read: "To Victor Emmanuel II, from the people of Milano."

The Galleria Vittorio Emmanuel is the pride of the city. Built during the heady days of Italian unification, around 1870, it was the first building in town to have electric lighting. Its art celebrates the establishment of Italy as an independent country. Around the central dome, mosaics symbolize the four major continents. The mosaic floor is also patriotic. The she-wolf with Romulus and Remus honors Rome, the national capital. 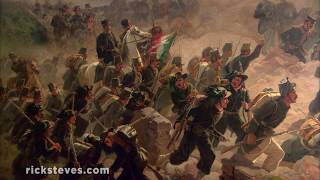