Montenegro: The Black Mountain of the Former Yugoslavia
Share

We visit the small, mountainous country of Montenegro (“Black Mountain”) and the workaday town of Centinje, the religious heart of the Serbian Orthodox Christian faith. In the humble village of Njegoši, we learn how the region’s flavorful ham is smoked.

The black mountains that define this basin gave this country its name, Montenegro. The road leads to Cetinje, the old royal capital back when this kingdom was a mountain stronghold. Today, Cetinje is a workaday two-story town. There's barely a hint of its former status other than the Montenegrin president's official residence. Former embassies sit vacant. While the economy feels flat, life goes on.

To better understand this scene, I'm joined by local guide Stefan Ducanovich who points out that while the king's long gone, the town remains the religious capital of his country. Its Orthodox monastery, the still-beating spiritual heart of Montenegro, is dedicated to St. Peter of Cetinje, a 12th-century local priest who inspired his people to defend Christianity against the Muslims.

Rick: This is a glorious scene.
Stefan: Yes, it is. Actually, it's the iconostasis, a place where just priests can go in time of service and that's typical for Orthodox churches. Most of people from Montenegro are actually Serbian Orthodox Christians. Here in this church, we can see also some very, very important relics, not just for Montenegrins but we can see from the pictures from whole part of the world because here in front of us we can see the right hand of the Saint John the Baptist.
Rick: That, in part, really kind of substantiates the fact that this is the most important religious place in Montenegro.
Stefan: Exactly.
Rick: This church.
Stefan: Exactly.

Tucked between the rugged peaks, communities and fertile valleys offer more insights into this persistent culture. Humble Montenegrin towns like Njeguši seem quiet, but there's industry where you might not expect it.

Rick: That's a lot of ham.
Stefan: A lot of ham and a lot of smoke. As you can see, actually what makes hams for Montenegro different than hams from, you can say, other part of the Mediterranean coast is actually the process of smoking. Because 15 days, 24 hours per day, they're putting the smoke right here. They use just beechwood for the smoke from local national park and that gives, we can say, the special taste to the hams from this village, Njeguši.

After 15 days of smoking, next 11 months they are drying the meat just on the air. Every 10 or 15 days, people who are doing that process are testing actually if the meat is good. They take like wooden sticks which they put inside of the meat, pull it out, and they smell if the meat is good. By the smell, they can feel if the process is okay. 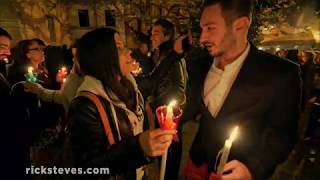 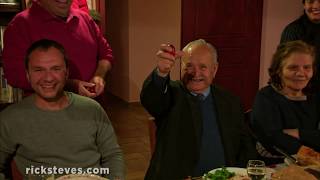 The Biblical Story of Easter, as Told in Great Art