The island of Sicily was created by Mount Etna, still Europe’s most active volcano. Today, tourists venture to its summit for the hot rocks, steam, and vast views. Visiting a family winery, we learn that grapes love Etna’s black volcanic soil and Sicilians love making wine.

Sicily is small — the size of Vermont — and the autostrada makes it smaller yet.

In just three hours, we’re clear across the island and heading toward the highest point in Sicily. At about 11,000 feet, Mount Etna, Europe’s biggest volcano, towers majestically above the villages and farmland of the east coast. Ascending dramatic switchbacks, we pass a buried house, an eerie reminder of recent lava flows. While there’s a serious eruption every few years, we should be OK today.

There are different ways to experience the mountain, and we’re taking the easy route. A gondola sweeps us over an otherworldly land of lava. At the top of the lift, we board an all-terrain shuttle. Climbing higher yet up the rugged track, visitors marvel as views get ever more dramatic.

Finally, at the end of the road, we hike to the lip of a vast crater. Hiking the circular rim leaves us with unforgettable memories. Today, the mountain’s quiet. But small plumes of smoke and steam remind us that this peaceful perch can change in a hurry.

Today, the slopes of Etna are renowned for their fertile soil and some of the finest vineyards in Sicily. We’re visiting the Benanti family estate — getting to know the father and his twin sons — for a taste of this dimension of the island.

Salvino: We’re in the slopes of Mount Etna, Europe’s most active volcano, and actually a great wine region. What we have here is volcanic soil. The soil comes from lava. Eruptions from thousands of years ago have now become sand, mixed with rocks — and they provide minerality to our wines. The soil gives the minerality, the altitude keeps the vines fresh — therefore, wines from Etna are highly distinctive, and they’re known for their elegance and finesse.

Etna, just like the rest of Sicily, has been producing grapes for thousands of years, but only in the last three decades has the quality of Etna wine achieved such great notoriety and prestige.

Wine has been made here for 200 years. The grapes will be gathered up there, on the top level, and be crushed by the workers’ feet. They will then be crushed a second time in the central vat, using this very heavy chestnut tree trunk as a press.

Aided by this very heavy stone and the bar, which will be turned heavily to press the grapes. The juice will then flow in here, ferment, and after one year, you would have wine. But this time, you don’t have to wait that long.

Rick: All right. Thank you.

We join our guide Alfio and Salvino’s twin brother Antonio to taste some of the family’s wine.

Rick: So, we all know Italian wine. What about Sicilian wine? It feels like it’s the new kid on the block.
Antonio: Well, a lot of wine has always been made on Sicily, but again, Sicily was sort of laid-back and somewhat poor region. But in the last couple of decades, new generations are more affluent, and more sophisticated, and that is showing in the wines.
Rick: So, as a Sicilian vintner, would you say, “look out, Tuscany”?
Antonio: Yes, you know, the whole world should keep an eye on what is happening in Sicily. The beauty of wine is diversity, and mirroring a culture in a glass. So, we are not trying to be like somebody else, or like some other regions. We are…we want to show the full potential of this region, and I think it’s starting to show.
Rick: And, Antonio, to that, I would say...buon lavoro. [here’s to your success]
Antonio: Buon lavoro. Grazie, grazie. 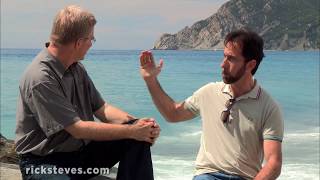