For 600 years the Wittelsbach family ruled Bavaria from Munich, and their Residenz palace showcases their best paintings, statuary, porcelain, and other exquisite treasures. And next door is a royal deli.

Munich — or "München," as it’s called in German — was long the capital of an independent Bavaria. Its royal architecture and grand boulevards constantly remind visitors that this was once a political and cultural powerhouse.

For maximum imperial Bavarian grandeur, tour the Residenz. This was the palace of the Wittelsbach family, who ruled Bavaria for more than 700 years. Like so many of Munich’s architectural treasures, it was destroyed in World War II and rebuilt since.

To meet the duke, all official guests had to pass through this gallery, lined with 700 years of Wittelsbach portraits. Always trying to substantiate the family claim to power, they included the great Charlemagne as an honorary family member.

The paintings are scarred by knife marks. In the final months of World War II, when Allied bombs were imminent, Nazi leaders gave the hasty order to slice each portrait out of its frame and hide them away.

The Wittelsbachs were always trying to keep up with the Habsburgs — their Austrian imperial rivals — and this long string of ceremonial rooms was basically all for show. The exuberant decor and furniture is from the 1700s — Rococo. And of course the Wittelsbach family had their own porcelain made for the palace. With all the mirrors, it’s porcelain forever.

Georg: So, you know, the whole palace was really for showing off. And imagine the duke bringing some of his most noble guests in here with all these miniatures in here — some even painted with just one-hair brushes. That was really a sensation in those days.
Rick: So these were copies of all the great masters.
Georg: Copies of the best paintings.

The palace ballroom was decorated with ancient Roman statues. The Wittelsbachs — like other European royals — collected and displayed busts of emperors, strongly implying a connection between them and the Caesars.

The palace treasury shows off a thousand years of Wittelsbach knickknacks and Bavarian regalia — the inspiration for so many fairy-tale crowns. Small mobile altars allowed kings to pack light and still have a focus for their worship while on the road. This crucifix carved from ivory is exquisite.

This reliquary, made in 1640, shows St. George killing the dragon. It sparkles with over 2,000 precious stones. You can almost hear the dragon hissing. It was designed to contain the relics of St. George.

The palace also came with a royal garden. Today, it’s the realm of everyday people rather than kings, dukes, and counts.

Back then, when the king called out for dinner, he called Alois Dallmayr. This royal delicatessen became famous for its exotic and luxurious food items — all the tropical fruits, seafood, chocolates, great wines, and fancy treats a king could want. Catering to royal and aristocratic tastes — and budgets — it remains the choice of Munich’s connoisseurs of fine living. 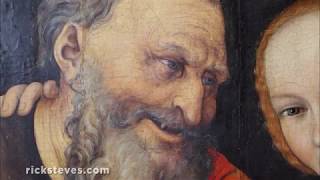