The Germanic National Museum displays art by Lucas Cranach (both elder and younger) and Albrecht Dürer, whose signed self-portraits show his pride and confidence. Dürer’s high-quality, reproducible prints were best-sellers. A nearby church contains wood-carved art, a German specialty.

Nürnberg’s Germanic National Museum is dedicated to sharing the cultural history of the German-speaking world. For German history buffs, this museum alone — with a vast and gorgeously presented collection — makes a visit to Nürnberg worthwhile.

When it comes to Germany’s reputation for fine craftsmanship, its passion for quality goes way back. These finely crafted, centuries-old precision instruments were intricate, innovative, and artful.

This is the world’s oldest surviving globe — crafted by a Nürnberger. Since it dates from 1492, the Americas are missing. While they understood that the world was round, the Western Hemisphere was still just a huge and mysterious sea.

The delicate wooden Nürnberg Madonna is also 500 years old. This intimate, anonymous carving of the favorite hometown girl was a symbol of the city for centuries.

The German painter Lucas Cranach was famous for portraits of his contemporaries — like the great German reformer, Martin Luther.

Cranach also painted poignant psychological studies — paintings that came with a message. In The Ill-Matched Couple the lecherous old man thinks he’s got the young maiden. But she looks knowingly out at us, as if to say “he’s a fool and he’ll get nowhere with me.”

The great painter Albrecht Dürer worked in Nürnberg around the year 1500. This is a self-portrait of that ultimate German artist.

Dürer, who was from the same generation as Michelangelo and Leonardo, was in tune with the Renaissance. He was a genius with a curious mind, a love of nature, and a passion for realism. After traveling to Italy and seeing how artists were becoming well-paid and respected, rather than anonymous laborers, he returned to Germany bringing the spirit of the Renaissance with him.

He painted this portrait of his mother when he was a teenager. While just 19, his passion for realistic detail is already apparent.

This painting, of Dürer’s teacher, was done after his experience in Italy. Its realism was unprecedented in Germany…and it’s signed. Again, now the artist will be respected and he proudly included his initials, A.D.

Dürer was a master at producing engravings made from finely etched metal plates. The detail and realism — a trademark of Dürer — is extraordinary. As he was famous in his own time, and because many prints could be made from a single master plate and therefore sold affordably, the engraving technique enabled Dürer to become the first best-selling artist in history.

And he made a lot of money — enough to purchase this impressive mansion beneath the castle. Today, it’s a fine museum about the life of perhaps Germany’s greatest painter.

A visit here includes a workshop where you can learn about Dürer’s craft. It’s with these tools that the artist engraves an image into the copper plate.

Visitors are treated to a demonstration of making a print from the plate. The subject is a hare — Dürer was famous for his vivid portrayals of the natural world. To be able to enjoy such beautiful, yet mass-produced art, must have been a marvel 500 years ago.

A few blocks away, towering nearly 300 feet above the pedestrians, is St. Lawrence Church. When emperors paraded into town, they’d approach its magnificent facade head-on.

Stepping inside you feel the splendor of that age. Suspended over the altar is the Annunciation, by the great Nürnberg woodcarver, Veit Stoss. Carved in 1517, it shows the angel Gabriel telling Mary that she’ll be giving birth to the Messiah. Startled, she drops her prayer book. The dove represents the Holy Spirit. And God — looking as powerful as a Holy Roman Emperor — looks down.

This lacy tabernacle is rich enough to hold the consecrated Communion wafer — which Catholics consider the “body of Christ.”

And supporting the tower on his shoulders is the artist who created it, Adam Kraft — gripping his noble tools with a proud confidence. Again, this was around 1500, and the humanistic spirit of the Renaissance was moving into Germany. 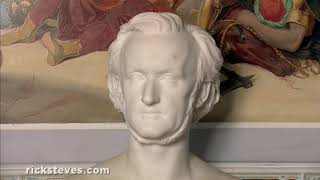 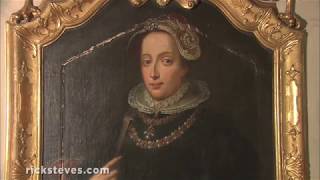