Marvel at the Eiffel Tower — a landmark of the Industrial Age — and the grand Notre-Dame, the spiritual heart of Paris. Explore the city’s people zones, where Parisians stroll, rollerblade, celebrate, and browse through bookstalls along the Seine.

The Seine River splits the city into the Right Bank and the Left Bank. Its two islands mark the center of the old town. Most of the essential sights lie near the Notre Dame, between the Eiffel Tower, the Latin Quarter, and Montmartre — the city’s highest point.

The Eiffel Tower was built in 1889 — to celebrate the 100th anniversary of the French Revolution, and to show off at a World’s Fair. It was a muscular symbol of the Industrial Age.

To a generation hooked on technology, it was the marvel of its day… trumpeting progress and man’s ingenuity. This 900-foot-tall tower has three observation levels; the higher you go the more you pay. For me, the middle level is plenty high. Thousands of iron bars and millions of rivets, all assembled in just over two years. Today, it stands tall, an exclamation point, symbolizing the proud, independent spirit of the French.

The Trocadéro Square, across the river, is the place to view the tower… and to check out a colorful scene. Parisians own their city. In fact, twice a week, streets are closed, and thousands turn out to roll through their city in an exuberant celebration of life.

Paris was born centuries before Christ right here on the Ile de la Cité — an island in the middle of the Seine River. The Romans conquered the local fishing tribe and set up camp. Today the Notre-Dame Cathedral marks the place where a Roman temple once stood.

The city’s first bishop, St. Denis, holds his head in his hands. When Christianity began making converts here, the pagan Romans beheaded him. But, according to legend, Denis just picked up his head and kept on going.

Inspired by this miracle, Christianity flourished and the temple was replaced by a church. Imagine the faith of the people who built this — breaking ground in 1163 on a building which wouldn’t be finished for 200 years. Gothic architects incorporated the latest technology — flying buttresses — to support the heavy rooftop. Its ghoulish gargoyles multi-task: They serve as fancy rainspouts and scare away the evil spirits.

The church is dedicated to “our lady” (or "notre dame"). Mary cradles the baby Jesus; the rose window provides a majestic halo.

The Virgin Mary was highly revered throughout the Middle Ages. The faithful petitioned her in times of trouble for both comfort and, through her intervention, God’s mercy.

As worshippers headed for Mass they’d walk under a relief of Judgment Day. Christ sits on his throne, the trumpet sounds, all are judged: peasants, knights, nobles, royals… even bishops. An angel weighs cute little souls while cheating demons yank on the scales. The saved stand happily at Christ’s right hand. The damned — a sorry chain gang — are on his left.

Carvings like that, and like this scene of Eve tempting Adam with an apple, remind us that this art was more than decoration. These images reinforced the stories people learned in church.

While the church is dedicated to Mary, the rest of Paris seems dedicated to regular Parisians. The old center, with its two islands in the middle of the Seine, retains a charming elegance. The Ile de la Cité is laden with historic sights. But the little Ile St. Louis, connected by a pedestrian bridge, is laden only with the delights of good living.

Rick: Great island…
Arnaud: Yeah, this is Ile Saint-Louis, Rick. I love this place. You know, all around is this really uniform architecture, everything dating from the 17th century and the beautiful apartments — very expensive, some the most expensive in town. I wish I could have an apartment here if I could afford it.
Rick: This is very trendy to live here?
Arnaud: Oh my God, wonderful… all along the streets you’ve got some galleries, quaint, you know, little boutiques and restaurants, and just down the street there, there’s a place, Berthillon, where you have the best sorbets in Paris.
Rick: Really?
Arnaud: Yeah, the island is charming. But the whole city of Paris is charming. In fact, it faces the River Seine, and the River Seine has been called by Parisians “the mirror of the city.”

Rick: So, what is the French word for these little stalls?
Arnaud: Bouquinistes, we call them. It comes from the name “bouquin,” which means it’s old French.
Rick: So, “old books” in old French?
Arnaud: Old books, yes, and they sell prints, you know…magazines…
Rick: And it goes back a long time?
Arnaud: Oh, back to the 1600s, yes indeed. They were all, you know, very wild vendors which were all along the River Seine like that. They all had to be regulated in the 19th century because they were so wild.
Rick: It’s just a classic Parisian scene…
Arnaud: It has a, you know, bohemian lifestyle. 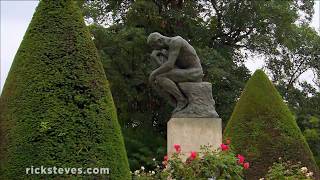