Porto, Portugal’s second city, is a gritty old port with New World pride. It’s trendy and revitalized. After enjoying grand avenues and blue-tiled facades, we cross the river to learn about the warehouse district and visit the lodges where port wine is aged.

Porto, the town that gave the country and port wine its name, is the second largest city in Portugal.

And, like second cities throughout Europe, Porto is a hard-scrabble town with a rough past. It’s recently emerged from a post-industrial funk to become trendy, revitalized with a fresh and creative energy.

The city is full of Old World charm: Prickly church towers dot the skyline. Houses with red-tiled roofs tumble down its hills to the riverbank.

Porto’s a solid city — it seems made entirely of granite.

The main drag, Avenue of the Allies, is named for Portugal’s WWI alliance with Britain and America. The wide boulevard, watched over by the huge city hall, is lined with monumental examples of Art Nouveau and Art Deco.

As if to counter all the heavy stonework, inviting shopping streets are ornamented with playful architectural touches. There are lots of lovely blue-tiled facades. Churches that are otherwise just more blocky granite are beautified by these fine blue ceramic tiles, called azulejos. And for a closer look, visit the old train station.

Storefronts evoke good times from the early 20th century. Delightful facades decorate venerable cafés, as Porto seems to cling to the style of an age gone by.

Porto’s romantic riverfront, the Ribeira district, is the city’s most scenic and touristy quarter. But before tourism, this was a hard-working port.

As you stroll, imagine the busy port scene here, before the promenade was reclaimed from the river. Cargo-laden rivercraft lashed to the embankment, off-loading their produce and wine directly into 14th-century cellars.

The old arcades lining the promenade are filled with hole-in-the-wall restaurants and souvenir shops. Behind the arcades are skinny, colorful houses draped with laundry fluttering like flags. The contrast of today’s tourist crowds amid these vivid, authentic neighborhoods is striking.

From here, a double-decker iron bridge crosses the Douro River. Inspired by Gustave Eiffel, when it was built back in the 1880s, it was the biggest such bridge in the world. Recently, its top deck was closed to traffic — now it’s just people and trams.

Across the river is a harbor lined with traditional boats called rabelos. Historically, these cargo boats transported kegs of wine from the inland vineyards down to Porto. The boats have flat bottoms, a big square sail, and a long rudder to help them navigate the twisty and, at times, shallow river.

Facing the riverfront is a district filled with warehouses. These port-wine lodges are where the world’s port wine comes to mature. Eighteen lodges compete and most offer tours and tastings. We’re visiting one to learn about the wine that put Porto on the map.

After the year-old wine is offloaded from the boats, it ages even longer here in these enormous barrels. This aging, on the cool, north-facing bank of the Douro, takes years, and even decades. And, when the refined and time-honored process is finally complete, the beloved port wine is ready to enjoy.

Rick: What is the difference between port and red wine that we think of?
Port server: The difference between a port wine and a traditional wine is the fact that the traditional wine has a complete fermentation, and a port wine is a fortified wine, so you stop the fermentation the second day by adding a really strong wine spirit, brandy, that has 77% of alcohol and kills all the yeasts. We have mainly two different styles: rubies and tawnies. The rubies, they age in big vats, so they will have little contact with oak, little contact with oxygen. The exact same wine, if you age it in smaller barrels, they will have higher contact with oak, higher contact with oxygen, and the oxygen will change the color. The coloring of tawny is lighter, and, you start to understand, much older, and much more mature fruit.

After enjoying our tasting, a fine way to cap our Porto visit is on a lazy boat ride. Several companies offer hour-long narrated cruises along the historic waterfront. Here in a city built over the centuries upon the fruit of the vine and the hard work of its people, we ponder the impressive and salty mix that created Portugal. 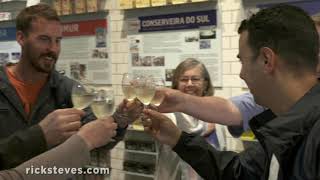