Portugal’s Age of Discovery — which produced a new trade route to Asia in the late 1400s — is commemorated by a monastery and monuments in Lisbon’s Belém District and at Prince Henry the Navigator’s school on Cape Sagres.

A trolley takes us along the waterfront from downtown Lisbon to the Belém District — a stately pincushion of important sights from the days when Portugal was Europe’s richest power.

Belem survived the big earthquake. Because of that, Portugal’s suddenly safety-conscious and rattled royalty chose to live out here — under wooden rather than stone buildings. To this day, Portugal’s royal palace stands behind these walls.

The adjacent royal stables now house one of Europe’s top coach museums. In 1905 the last Queen of Portugal realized that cars would make horse-drawn carriages obsolete. She decided to preserve her fine collection of royal coaches here. The museum shows 70 dazzling carriages in the Queen’s elegant old riding room.

The oldest is the crude and simple coach used by King Philip II to shuttle between Madrid and Lisbon in around 1600. This coach had no driver’s seat; its drivers would actually ride the horses. With bad roads and crude leatherstrap suspension, the ride was slow and rough. You’ll have to trust me on this, but, if you lift up the cushion, you’ll find a potty hole — also handy for road sickness.

Tracing the evolution of coaches through the next century, you’ll notice the decoration evolves along with the comfort. The Portuguese coat of arms indicates this carriage was part of the royal fleet. The ornamentation includes a folk festival of exotic faces from Portugal’s distant colonies.

The lumbering “Ocean Coach” is as ornate as it is long. At the stern, gold figures symbolizing the Atlantic and Indian Oceans holding hands, reminded all of Portugal’s mastery of the sea.

Just down the street is the Jerónimos Monastery with Lisbon’s most impressive church. King Manuel — who ruled around the year 1500 — built this giant church and monastery as a thanks for overseas discoveries.

Manual financed the construction in part with “pepper money,” a five percent tax levied on spices brought back from India. He built all this on the site of a humble sailors' chapel where seafarers prayed before embarking on their frightening voyages. The style of Manuel's church? Manueline.

This uniquely Portuguese style reflects the wealth of the times and the many cultural influences of the Age of Discovery. Manueline decoration is ornate, featuring motifs from the sea.

This style is on the cusp of the Renaissance. Unlike earlier medieval churches, the interior is more open. Palm tree-like columns are slender rather than massive and the side isles are as lofty as the nave.

The interior is decorated with more age of discovery motifs: monsters evoke the mystery of undiscovered lands, a totem pole of faces celebrates Portuguese conquests, artichokes — eaten for vitamin C to fight scurvy — remind of hardships sailors faced at sea; and the ceiling — a boy scout handbook of knots — trumpets Portugal’s technical expertise.

This is Vasco da Gama’s tomb. In 1497, he spent an evening praying here for a safe voyage. The next morning, he set sail with four ships — caravels like this — and 150 men.

His mission? To find a direct trade route to the vast wealth of Asia. When he succeeded (sailing around Africa), sea trade eclipsed overland trade with Asia. And almost immediately, Italy’s trade plummeted, Portugal’s trade sky-rocketed and the seafaring nations along Europe’s Atlantic coast — England, Holland, Spain, and Portugal — emerged as economic powerhouses.

With all that prosperity came money for art. These lacy Manueline cloisters — my favorite in all of Europe — are the architectural highlight of Belém. The sheer size of this religious complex is a testament to the religious motivation that — along with money — propelled the Age of Discovery.

The Belem Tower, with more textbook Manueline decor, protected Lisbon’s harbor and today symbolizes the voyages that made Portugal powerful. This was the last sight sailors saw as they left and the first when they returned, bearing gold and spices

The giant Monument to the Discoveries — built in 1960, on the 500th anniversary of Henry the Navigator’s death, shows that exploring the world was a team effort. Standing on the prow of a ship are royalty, poets and painters, knights who Christianized foreign lands with the sword, great explorers such as Vasco da Gama, and finally — the man who spearheaded the push for exploration…Prince Henry the Navigator — holding the ship that made it possible…a caravel.

To mix in a little fun in the sun with our history, we’re driving three hours south to the rugged southwestern tip of Portugal…Cape Sagres. This was as close as you could get to the edge of our flat Earth in the days before Columbus. A lighthouse marks what was referred to even in ancient times as “the end of the world.” Today, salt-of-the-earth merchants sell seaworthy sweaters. Fishermen cast their lines off the dizzying cliffs. And tourists go for that “end of Europe” photo.

Five centuries ago, Prince Henry the Navigator, determined to broaden Europe’s horizons and spread Catholicism, established his sailing school right here. This was Henry’s mission control, from where he sent sailors ever further into the unknown. And here he debriefed shipwrecked and frustrated explorers as they washed ashore.

Little remains of Henry’s original school beyond this evocative stone circle. Nobody really knows its function. Some say it was a tool for celestial navigation. Others figure it was a wind-compass…with a flag in the middle blowing in the direction of the wind. What ever the case sailors came here to learn everything they needed to know for world exploration: ship-building, map-making, navigation…even languages and salesmanship for mingling with natives in newly discovered lands.

Today, Cape Sagres marks the western tip of the Algarve. Portugal’s south coast was once known as Europe’s last undiscovered tourist frontier. But now it’s well-discovered, the darling of tour brochures, and much like Spain’s Costa del Sol…paved, packed, and pretty developed. 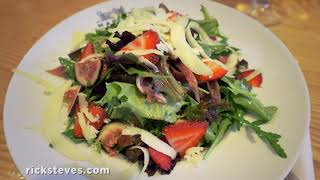 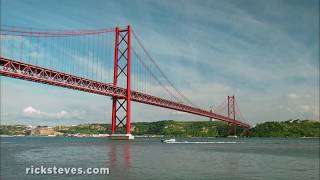