After touring the fanciful palace of Romania’s first king, we head to Transylvania to visit Sighișoara (with a walled old town) and learn about Vlad the Impaler (a brutal prince), now known as Dracula (a fictionalized vampire based on the prince).

Heading north for the Carpathian Mountains, we leave Bucharest. Stunning fields of poppies are irresistible. And this quick roadside stop is just too joyful to pass up.

Our next stop is Peleș Castle, the summer residence of Romania’s first king, Carol. Carol chose a mountainous and forested setting that reminded him of his German homeland. And he imported German architects to create this fanciful hunting lodge. Prickly with over-the-top spires, Peleș ranks among Europe’s finest Romantic Age palaces.

And it boasts one of the most dazzling late-19th-century interiors anywhere. The Hall of Honor — with its red carpets, grand staircase, and venerable portraits — sets the tone. The woodwork is exquisite.

The rest of the rooms have a grand yet somehow cozy elegance: glittering crystal chandeliers, thoughtful touches.

King Carol ruled for 48 years. When summering at the palace, he took care of matters of state in his study.

For over 30 years, the king dined with guests here. His impressive collection of weapons and armor stoked conversation. The library showed off the king’s passion for education. And today, more than a century later, tourists from around the world still marvel at King Carol’s castle.

Just over the Carpathian Mountains, we cross into the fabled region of Transylvania. Trans-sylvania: It means “across the forest…” and that’s literally where we’ve gone.

We’re spending the night in the handy home-base town of Brașov, which fills a scenic mountain valley. Most of the city’s people live in boxy communist-era apartment blocks — many of which have been spiffed up. But the historic Old Town is much more charming. It’s packed with locals enjoying a balmy evening. Thriving and appealing, Brașov offers glimpses into a midsize Romanian city that has its act together.

Among other things, Transylvania is well known for its rustic and wild countryside and a medieval history with a surprising German twist.

In the 12th century, Transylvania’s Hungarian overlords needed help taming this wild frontier. So they imported skilled merchants and hardworking settlers from the German lands. For that reason, you’ll find German-speaking enclaves and delightful German towns in this part of Romania.

One of Transylvania’s seven original German towns is Sighișoara — perhaps the most popular tourist town in all of Romania. The old center is entirely contained within its fortified hilltop.

Several of Sighișoara’s watchtowers still survive. And its historic centerpiece is its clock tower — proudly trumpeting the town’s special status in the Middle Ages.

Nearby, a statue honors the town’s tenuous connection with an infamous Romanian prince, Vlad Țepeș. In the 15th century, he ruthlessly fought the Turkish Ottomans. Much later, he became better known as the inspiration for a vampire.

Vlad had two nicknames: “Vlad the Impaler” and “Dracula” — that means “son of the devil.” Vlad the Impaler was brutal in his defense of his homeland. While he didn’t drink anyone’s blood, he was sadistic, famously impaling his victims. The popular Dracula myth came much later.

Dracula, in the myth, is a fictitious vampire created centuries later by the Victorian novelist Bram Stoker. He wrote his famous novel, Dracula, after being inspired by the tales of this bloodthirsty prince and other local legends.

For many, when in Transylvania, a stop at Bran Castle is considered a must. While people call it “Dracula’s Castle,” it has virtually nothing to do with Vlad the Impaler.

But that doesn’t stop the tourists from coming… or locals from selling their vampire kitsch. Past the tacky souvenir gauntlet, a cobbled path curls up to the castle entrance. Despite the fanciful legends, Bran is actually a fine example of an authentic medieval fortress, dating from the 14th century.

Some of Romania’s most memorable fortresses aren’t castles at all — they’re actually churches. While big towns were well fortified, smaller German villages were vulnerable to invaders. So what did the industrious settlers do? They fortified their churches.

Dozens of fortified German churches — mostly built in the 13th and 14th centuries — are scattered across Transylvania. Like other medieval fortresses, they have beefy bastions, stout lookout towers, and narrow slits for archers.

Entire communities could take refuge inside — within these wrap-around defensive galleries. This fortified church had a room for each family — and, when under attack, each family had a defensive responsibility.

Stepping inside these churches feels like stepping into medieval Germany. Decoration was humble, pews were simple benches, Bible quotes are in German, and to this day, the services are Lutheran.

Today most of Romania’s ethnic Germans are gone — having emigrated in the late 19th century or fled to Germany after World War II. Those who remain speak a time-warp German and work hard to keep their unique cultural heritage alive. 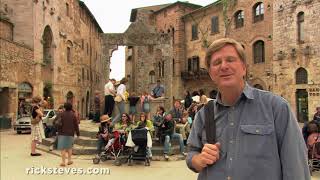