Modern Stockholm respects its country’s royal past, which we’ll see at the Changing of the Guard, two palaces, an armory, and the Vasa Museum, which showcases a fascinating, titanic flop — a 17th-century warship that sank on its maiden voyage.

Stockholm is defined as much by water as it is by land. Part of an archipelago it’s surrounded by both the sea and a large lake. The city is nearly as full of parks and trees as it is wood buildings and it’s traversed by numerous bridges. Wander through the city and you're struck by its elegant architecture, proud monuments, and inviting promenades. Stockholm's appealing waterfront is both a working harbor and a welcoming people zone.

Overlooking it all in the heart of the old town is the Royal Palace. In summer, with great fanfare, military bands herald the Changing of the Guard.

The ceremony in the courtyard of the palace recalls the days when Sweden was a militaristic power – a kingdom to be reckoned with. While this spectacle does look formidable, it's more a celebration of Swedish heritage in a country that today is famously pacifist.

Strong and expansionist kings — like Gustavus Adolphus, who ruled in the early 1600s and was a brilliant general — made Stockholm this country's permanent capital and established the Swedish Empire.

Gustavus Adolphus was nicknamed the Lion of the North. He made Sweden one of Europe’s top powers and was instrumental in helping the Protestants turn the tide against the Catholics in the Thirty Years War. Because of his innovative tactics on the battlefield, he's considered by many the Father of Modern Warfare.

For a glimpse at the splendor of Sweden's former power, step into the Royal Armory. While fearsome on the battlefield, armor had a ceremonial value as well. These pieces must have dazzled viewers back in the 1600s — that was the point. The fine workmanship elevates tools of war to an art form. The same lavish attention to both protection and style was also given to horses.

The Swedish royal family kept up with their counterparts elsewhere in Europe. Four centuries of coronation and royal wedding wear take you from the time of Gustavus Adolphus — this is his fine suit — through the ages. This 1766 wedding dress of Queen Sofia was designed to cleverly show off her fabulous wealth. And the dress — with its extravagant material — seems even wider when compared to her 20-inch corseted waist.

The Royal Palace which contains this museum and several others is one of Europe’s biggest. While it’s technically the royal family’s official residence, they actually live outside of town at Drottningholm Palace. The most scenic way to get there is the way the royals once did — by boat. We're cruising up Lake Maleren. This relaxing voyage is a delight, revealing more dimensions of this city of lakes, parks, and islands.

Drottningholm Palace has been called "Sweden's Versailles." The public is welcome to enjoy the garden and tour the palace.

The grand entry leads into a world where 18th century style prevails. Back then, Europe's monarchs, who were considered divinely ordained to rule, were tightly networked by marriage. In fact the Swedish royal family had blue-blooded cousins ranging from Catherine the Great in Russia to Louis 16th in France.

The décor pushed the notion of a divine monarch. But the king was long challenged by a strong parliament and, today, Sweden's royalty is a modern constitutional monarchy.

The ball room hosted formal occasions. The bed room was a kind of theater where the monarch would be ceremonially dressed as nobles would help him slip into his leotards. The lavish library illustrated the royal commitment to education in the 18th century. The palace's baroque theater takes you back 200 years. And as in palaces throughout Europe, Roman busts implied at least symbolic connections with the Roman Empire in order to substantiate and legitimize royal power.

The Vasa Museum is my favorite maritime museum anywhere. It took several centuries, but Stockholm turned a titanic flop into one of Europe's great sightseeing attractions. The Vasa — while heralded as the ultimate warship of her day — sank, just minutes into her maiden voyage.

It was 1628. The king, eager to expand the reach of his domain, launched his formidable new war ship. Laden with an extra row of cannon, she was top-heavy. A couple hundred yards from the dock, a breeze caught the sails and blew it over. The Vasa sank to the bottom of Stockholm's harbor where it sat for over 300 years. In 1961, with the help of steel cables and huge inflatable pontoons, the Vasa rose again from the deep.

Today the Vasa, the best-preserved ship of its kind, is chemically petrified and housed in a state-of-the-art museum.

The Vasa is decorated with hundreds of statues — all designed to show the power of the king known as "the Lion of the North," Gustavus Adolphus. Detailed models like these show life on board and evoke the instant when the hopes and aspirations of this mighty ship and her crew were dashed.

Artifacts on display humanize naval live in the 17th century. This awe-inspiring ship is a time capsule from an era when Sweden was a European power and was gearing up to expand its empire. 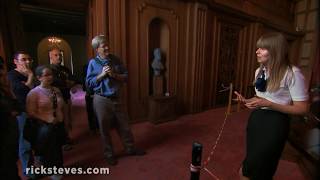