Siena: A Gothic Powerhouse and a Joy Today
Share

Siena — once powerful and now laid-back — is a joy. Its fanned-out main square is the perfect place to survey City Hall, its tower, and museum, which extols the wisdom of good government, as the locals enjoy their evening stroll — the passeggiata.

Back in the 1300s, Siena was a major banking, trading, and military power. It was in a league with Venice, Florence, and Genoa. It had a population of about 50,000 people — that was one of the biggest cities in Europe — about as big as Paris. But after being weakened by a devastating plague and conquered by its bitter rival, Florence, it’s been a backwater ever since.

Siena’s loss became our sightseeing gain, as its political and economic stagnation preserved its purely Gothic identity. Its population hasn’t changed for centuries: It’s still around 50,000.

Siena’s great central piazza is Il Campo. Like a people-friendly stage set, it’s the heart of Siena, both geographically and metaphorically. The historic junction of Siena’s various neighborhoods, or “contrade,” it fans out from City Hall as if to create an amphitheater. The square and its buildings are the color of the soil here: a color known to artists and Crayola users as “burnt Sienna.”

Sprawling before the City Hall backdrop, the gently tilted piazza offers the perfect invitation to loiter. This is a major university town, and a mix of students, locals, and tourists lounge comfortably, as if it’s their community living room.

The great sights of Siena date from long before the country of Italy existed. And these sights have a consistent theme: The Republic of Siena is independent and perfectly capable of ruling itself.

The Mangia Tower [City Tower], built nearly 700 years ago, remains one of Italy’s tallest secular towers. Medieval Siena was a self-assured republic, and this tower stands like an exclamation point — an architectural declaration of independence from both the pope and the emperor.

Three hundred winding steps take you high above the town. Your reward: a bird’s eye view down at the uniquely shaped square and a commanding view of the Tuscan countryside.

Beneath the tower, the city hall [Civic Museum] is open to visitors. Its historic rooms were, for centuries, the home of Siena’s government. In the “room of peace” the republic’s council met under instructive 14th -century propaganda showing the effects of good and bad government — with a message that seems remarkably applicable today. Bad government — a dictatorship counseled by greed and tyranny — results in a place you wouldn’t want to call home, with run-down buildings and violence in the streets.

But good government — with wise and virtuous leadership — results in a utopian republic where the shopping’s brisk, construction’s booming, students are attentive, and women dance freely in the streets. The message: A community ruled by a just government enjoys peace, prosperity…and is a great place to raise your kids.

For a portrayal of that “good government” in action, drop by the historic hospital of Santa Maria della Scala. A series of idealized frescos show medieval Siena’s innovative health care and progressive social welfare system at work. The city, rather than the Church, ran this hospital, illustrating how far secular society had come in Siena by the 1400s.

It took in and raised orphans — from wet nurse through schooling — to a civil wedding. And this wedding is not arranged; it’s based on love.

Sienese society cared for its poor. Bread was given to the needy. Note the loaves are cleverly stamped — to prevent resale. The hospital was run by secular doctors and nurses. In a slap to Church authorities, the well-fed monk looks bored as he seems to ignore a dying patient’s confession.

Siena is a stony wonderland where people rather than cars fill the streets. It’s that time in the early evening when friends gather and stroll. Like in any Italian city, the people of Siena are out and making the scene. This ritual is called the “passeggiata” — it’s like cruising without cars. In fact, throughout the Mediterranean region, early evening is the time to be out and about.

The passeggiata is ideal for getting together with friends…and I’m joined by my friend and fellow tour guide, Roberto Bechi. With Roberto, my passeggiata includes a little history.

Rick: I just feel there’s so much history all around.
Roberto: Yes. Especially on this road here.
Rick: What happened on this road?
Roberto: This road, in the Middle Ages, was called “Via Francigena” —
Rick: The way of the French.
Roberto: Yes. It’s where all the pilgrims were passing through, from France to Rome.
Rick: This is the pilgrims’ route!
Roberto: Yes.
Rick: For centuries! And people are walking, to this very day.
Roberto: Yeah, but they do passeggiata.
Rick: But now…passeggiata today.
Roberto: Oh, I love the passeggiata. All the time in summer the passeggiata.
Rick: Everybody’s out. Every generation.
Roberto: Every generation going up and down on the main road, shopping, looking at the last fashion…
Rick: What are the fashions, who’s got a new baby…
Roberto: Absolutely. 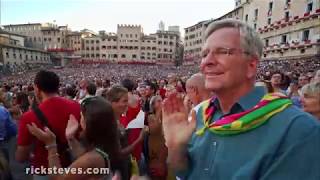