The Netherlands: Tulips and Creating Land from the Sea
Share

Learn how the Dutch reclaimed land by building dams and dikes to section off the shallow sea, then used windmills to drain the land. The result is fertile farmland, good for the tulip industry, which we see in action at Aalsmeer's flower auction.

The Netherlands is small — smaller than West Virginia — and the most densely populated country in Europe. Most of the country is below sea level, reclaimed with great effort over many generations from the sea. That’s why they like to say, “God made the world, but the Dutch — we made Holland.”

This is polder land. Much of it once covered by the sea, it was encircled by dikes and dams and then drained. To pump out all that water, the Dutch used one of their leading natural resources: the wind.

For centuries, the Dutch built windmills. Over a thousand survive, and many still work. Some welcome visitors interested in a peek at the clever engine that powered the creation of this land.

I’m standing on reclaimed land, 12 feet below sea level. The challenge for the Dutch: to keep this land dry by pumping water uphill. Many windmills used their wind power to turn an Archimedes’ screw — like this — which, by rotating in a tube, lifted water up and over the dike.

To catch the desired amount of wind, millers, like expert sailors, know just how much to unfurl the sails — or furl them back — as necessary. Mills are built with sturdy oak timber frames to withstand the constant tension. These timbers have stood strong since the 1600s. When the direction of the wind shifts, the miller turns the cap of the building — which weighs many tons — to face the breeze. As he spins the winch, it all slides on these wooden roller bearings. Then, with a hefty chain, he anchors it in the correct spot. As the wooden cogs connect, wind becomes clean power, Archimedes’ screw rotates, and the water spirals up.

The Dutch had long eyed what was the vast inland Zuiderzee as a source of new land. This 18-mile-long dam was built as one of many steps in turning that sea into farmland.

The master plan? Cordon off sections of the shallow sea with hundreds of miles of dams and dikes like this. Then, by draining each section dry, piece by piece, build a bigger country.

These fields were once the bottom of that wide-open sea. Gradually, land was reclaimed and today the Netherlands is twice the size it was 400 years ago. Because of this reclamation, what had been fishing villages on little islands — like Schokland — are now high and dry mounds rising above fertile farmland.

Behind this sturdy stone-and-wood seawall, this tiny community once harvested the sea. In its day this cannon warned villagers of a high tide.

I’m standing below sea level. I know that because I picked up a handful of dirt and it came with some shells, and this marks sea level according to the official Amsterdam measure…zero.

Imagine: A couple generations ago, this buoy bobbed in the harbor. What was the bottom of the sea is now productive farmland.

And here at the Aalsmeer flower auction, it’s clear: flowers are big business in Holland. Visitors are welcome in this, one of the world’s largest commercial buildings.

They witness millions of dollars in the trafficking of flowers. In its auction halls, hundreds of wholesalers bid on trainloads of flowers as they roll by. To get the flowers out as fresh as possible, everything happens fast, including the bidding.

A “Dutch auction” is speedy because the prices go from high to low. Batches of flowers are sold to the first buyer to press the button. Buyers must be lightening quick — it’s the only way to sell so many flowers in one morning.

Strolling the fragrant catwalk, it’s fun to peer down on the action. They boast that fresh flowers go from cutting in the fields to flower shops anywhere in Europe within 24 hours. Workers scramble to get each buyer’s purchase assembled on a train and shipped out. The Dutch are the world’s leading flower exporters — 80 percent of these flowers are going abroad. Every day from this building, 20 million flowers are shipped, destined to make someone’s day. 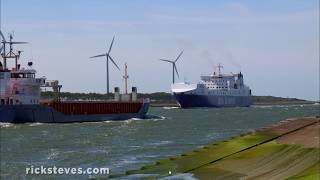 The Netherlands: Dikes and a Rising Sea