The Dutch work hard to protect their reclaimed land from flooding, all the more important now that the sea level is rising due to climate change. We visit the Maeslant Barrier, which employs long "arms" to protect the densely populated Rotterdam delta from storm surges.

The country is bounded by the North Sea. Where there are no natural dunes to keep the sea out, the Dutch have had to build mighty walls, or “dikes,” to protect their farms and communities.

Roughly half the people and half the land here in the Netherlands are below sea level. And for 700 years, the Dutch have developed their expertise at keeping this country dry. It’s a constant battle. And now with climate change and rising sea levels a reality, the work is that much harder and more expensive.

Even with impressive dikes already in place, the Dutch are moving mountains of sand and mud to fortify their dikes and protect their next generation. Famous for both their frugality and their foresight, the Dutch are investing billions of euros as climate change makes its costly impact felt on sea-level communities here and around the globe.

And flood protection requires more than massive dikes. Built where the big river meets the sea, the Maeslant Storm Surge Barrier is an amazing engineering project. When necessary, its two arms — each as long as the Eiffel Tower is high — are swung together to create a barrier. This stops a storm surge from flooding the Rotterdam delta, where a million people live. Low-lying American cities are importing Dutch expertise as they, too, face the reality of the future. 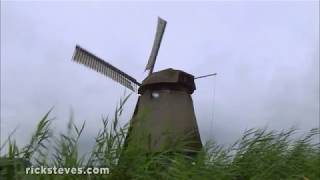 The Netherlands: Tulips and Creating Land from the Sea