Luther’s call for reform inspired others to do the same (Zwingli, Calvin, Knox, and Ignatius). Some kings found it lucrative to break with the Church. The Church retaliated with the Counter-Reformation, using propaganda and intimidation to bring back worshippers.

The epic showdown at the Diet of Worms inspired others to action. Before long, across the land, monks and nuns left their monasteries, priests got married, and peasants were actually challenging the Feudal system. Things went beyond Luther’s intentions of reforming the Church. The Reformation was unleashing a grassroots social and political rebellion — and it spread like fire.

The changes spilled beyond religion. In 1524, Germany's peasants — emboldened by Luther's brave challenge to the status quo — rose up, attacking their feudal masters with hoes and pitchforks. They misinterpreted Luther's calls for freedom of religion to mean freedom from their feudal lords as well. Luther — who was only concerned with issues of faith and the Church — was horrified that his ideas could be mis-used to spark such a social revolt. He actually condoned the nobles' brutal crackdown as they killed thousands of peasants to restore order. But it was clear, the wheels of Revolution he'd set in motion, could not be stopped.

Martin Luther’s reforms unleashed turmoil far beyond his intent. Eventually Luther left his Wartburg castle refuge, and returned home, here to Wittenberg. He surrounded himself with a theological think tank and worked to rein in the extremism now rampaging through the land, and to give direction to the Reformation and to what was becoming the Lutheran church.

The Reformation movement spread far beyond Germany in the early 1500s. Luther, while pivotal, was only one of many Christian leaders struggling to reform the Church.

In Switzerland — a land with deep roots in democracy and free-thinking — Ulrich Zwingli also challenged the authority of Rome. From his pulpit in Zurich, he railed against church corruption and any practices that weren't specifically mentioned in the Bible. His mission: to place a Bible — written in everyday German — into the hands of every person. Zwingli's ideas reached each of Switzerland's remote cantons, and his theology gave the famously independent and yet to be united Swiss something in common.

In nearby Geneva, in this church, a Frenchman named John Calvin, also preached reform. Like Luther, Calvin was convinced that salvation was by God’s grace. But Calvin emphasized pre-destination: the notion that God had already decided who was saved. Calvinism, which evolved into Presbyterianism, spread to France, the Netherlands, and beyond.

Protestant ideas spread quickly through Scandinavia, thanks to its rulers. King Christian III of Denmark had actually been present at the Diet of Worms and was inspired by Luther's brave stand. He returned home to Copenhagen to establish Lutheranism as Denmark’s state religion.

The Swedish king, Gustav Vasa, took a shrewd political approach. He used the Reformation to make a clean break with Roman Catholic rule, nationalize church holdings, and consolidate power for himself — thus becoming the "father" of the modern state of Sweden.

In England, King Henry VIII also broke with the pope in Rome — but for selfish as well as political reasons. He created the Church of England — with himself at its head. He dissolved the monastic orders, destroyed their abbeys, and appropriated the Catholic Church's vast land-holdings. When Catholics rose up against him, Henry had the ringleaders hung, drawn, and quartered. And, his actions left Henry not only much richer and more powerful, but free to divorce his barren wife and marry his fertile young mistress.

In Scotland, John Knox preached at the main church in Edinburgh where he founded a separate protestant denomination, austere Scottish Presbyterianism. Knox insisted that every person be able to read the word of God for themselves, which resulted in Scotland developing an education system centuries ahead of its time.

Not all Reformers broke from the church.

The priest and philosopher, Erasmus of Rotterdam admired Luther's ideas on the importance of faith over good deeds. Like Luther he openly questioned the Church. But he proposed sweeping reforms from within. Erasmus remained a priest and never left the Catholic Church.

A Spanish soldier named Ignatius of Loyola had a spiritual conversion and spent a decade wandering Europe on a pilgrimage. He eventually formed the Jesuits — a religious order whose mission was to be the intellectual warriors of the Church, battling both corruption within the Church and heresy outside the Church.

During the early 1500s, new ideas were cross-pollinating throughout Europe. Protestant Reformers, Catholic Reformers, humanists, and scientists were all reading each other's words. It was an exciting and confusing time: Two powerful cultural movements — the Reformation and the Renaissance — were rushing together in a swirl of currents, as history flowed on.

All across Europe, the momentum seemed in favor of reformers. But the spread of the Reformation didn’t happen without chaos and conflict. In many areas there were violent uprisings.

From Holland to Switzerland, Protestant extremists vandalized Catholic churches. They attacked what they considered symbols of idol worship — forbidden by their interpretation of the Bible. These “iconoclasts,” as they were called, shattered stained-glass windows. They lopped off the stone heads of saints, and stripped gold-leaf angels from the walls.

For example, the biggest church in Switzerland, the Lausanne cathedral, was originally Catholic and dedicated to Mary. But when the Reformation hit, Swiss reformers purged it: whitewashing colorfully frescoed walls, trashing stained glass windows, and smashing statues of Mary and the saints. Today, the church remains clean of images and dominated by its extravagant pipe organ.

Another example is the once Catholic, now Protestant main church of Haarlem in Holland. While now white-washed in the Protestant fashion, the pillars reveal the decorative original frescoes that were covered up. The many gilded chapels dedicated to various saints were removed. The towering pipe organ is a reminder that for Protestants, music became more important than the visual arts.

And pulpits became a prominent feature — because of the Protestant emphasis of bringing the word of God directly to the people in their own language.

In territories where Protestants dominated, Catholics survived but went underground, forced to practice their faith in hidden churches. In generally Protestant Amsterdam for example, this Catholic church kept a low profile disguised as a townhouse.

Persecution of Catholics, along with the rise of Protestantism was turning Catholics into a minority in Northern Europe. By the mid 1500’s, the Roman Church employed a strategy for stemming the tide of reformation.

The Vatican fought back with the Counter-Reformation…an attempt to put what was the universal Catholic Church back together. On one hand, the Church worked to reform its internal corruption and reach out to alienated members. And on the other hand, the Church resorted to propaganda, intimidation and outright force.

Art became a propaganda tool. Extravagant Counter-Reformation art and architecture was designed to inspire the masses. Catholic churches dazzled with gold leaf and ornate decorations, offering a glimpse of the heaven that awaited those who remained faithful.

Counter-Reformation artists painted radiant, soft-focus Marys, sentimentally wrapping everything in warm colors and gentle light. This bubbly Baroque style of art featured large canvases, bright colors, rippling motion, wild emotions, grand themes, and holy saints. It appealed to the senses and was popular with peasants and nobles alike. It made heavenly visions real and stirred the emotions. This Baroque style remained popular in Catholic parts of Europe for generations.

The Church’s propaganda art could intimidate as well as inspire. Worshippers saw images of God-fearing Catholics burning Protestant pamphlets, of defenders of the Church stepping on snakes representing heretics, and angry angel babies tearing out pages of Lutheran teaching.

And the Counter-Reformation relied on an institution dating back to earlier times: The Inquisition. It emanated from Spain at the imposing Palace of El Escorial. This full-scale, Church-run legal system brought Protestants, Jews, and nonconforming Catholics before its courts on the slightest evidence of "heresy." Those convicted would be punished, tortured, and — in many cases — executed.

The Protestants responded with anti-Catholic propaganda of their own. In this painting, hanging in Luther's hometown church in Wittenberg, the Reformers tend to “The Garden of the Lord.” Luther rakes and his intellectual side-kick, Melanchthon, pulls water from the well — symbolizing how the Reformers went back to the original source to translate the Bible. Meanwhile the pope and his people trash all their careful spiritual gardening. Even though Jesus has given the pope a reward, the pope keeps his hand outstretched asking for more. Meanwhile, the Reformers pray reverently. Other art was shockingly direct — in this etching Protestants portray the pope as Satan himself. 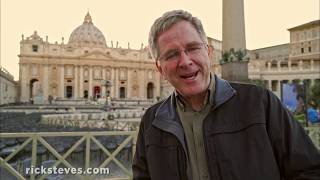