The Reformation, which shook up Europe, led to a hundred years of wars — over religion, land, and power — that ended with this decision in 1648: The leaders of each country could choose their religion. As a result, western Europe was (and still is) roughly divided in half, with the north Protestant and the south Catholic.

The Reformation and Counter-Reformation unleashed pent-up frustrations that transformed Europe into a battlefield for the next hundred years. The wars may have been called “religious wars”, but for the princes who ruled the many little German states, breaking with Rome — as with most religious wars — was also about power, money, and land.

Many German princes — like Luther’s supporter, Frederick the Wise at Wittenberg — saw the Roman Church as an obstacle to greater power. And at great peril, many opted to split from the Roman Church to support Luther…even if that meant war.

For a German prince, there were three big reasons to break from Rome: First, by opposing the pope, princes could rule without meddling bishops (who were above secular laws). Second, princes could hold onto tithes formerly sent to Rome — a huge drain on their economies. And third, the biggest landowner in their realm was the Church, and by joining forces with the Protestants, princes could confiscate Church lands.

The strife Martin Luther had unwittingly unleashed led to a chaotic series of wars that would last more than a century. Throughout the 1500s, Europe’s princes and kings jockeyed for power, using religion as their excuse. It culminated in a bloody free-for-all called the Thirty Years’ War that raged from 1618 to 1648. While the war involved many countries, it was fought mainly on German soil. Much of the battle gear, ramparts, and folkloric reenactments tourists see today in Germany dates from this war. Casualties were devastating as a third of all Germans were killed. On the Catholic side, the pope was supported by the powerful Holy Roman Emperor. The emperor had Europe’s leading army and was more than willing to march into Germany and put down Protestants. As these wars — with a mix of political and religious agendas — raged across Europe, princes grabbed for power while the people violently sorted out their deep-seated religious frustrations.

After literally millions of deaths, the devastation of entire regions, and wide-spread economic ruin, all involved were exhausted.

In 1648 a treaty was finally signed. The result: not religious freedom. But now the leaders of each country were free to decide if their subjects would be Roman Catholic Christian or Protestant Christian.

Western Europe was effectively divided between a Catholic south and a Protestant north — a line that roughly survives to this day.

Europe had split into two camps. On one side was the Roman Catholic Church — those Christians who still recognized the pope. On the other side were the “Protestants,” or protesting Christians. Of course, both Catholics and Protestants are Christians. But they have different styles and take different approaches.

For Catholics, church rituals and an ordained clergy are essential intermediaries between a worshipper and God. They venerate saints and the Virgin Mary and confess their sins to a priest. Catholics accept precedents established through the centuries by the Church and follow the spiritual leadership of the pope in Rome. And they maintain a time-honored element of elaborate ritual and mysticism that enriches their religious experience.

For Protestants, worship style became different. They purged their churches of holy relics, dispensed with many of the rituals, and reduced the formal role of ordained clergy. Rather than appealing to saints and Mary, Protestants emphasize their direct relationship with God through Bible study and personal prayer.

Luther rejected five of the Catholic Church's seven sacraments. He kept only Holy Communion and Baptism. The Lutheran movement introduced two essential changes: They believe, first, salvation is a gift from God — it’s a matter of faith — you can’t earn it. And second, the Bible is the only source of religious authority. 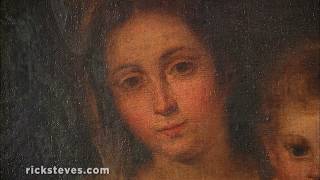 The Reformation Spreads and the Counter-Reformation