The diversity of Israel’s Jewish melting pot community shows itself in the way people dress. Dropping into an Orthodox neighborhood with a knowledgeable Jewish friend, people-watching comes with fascinating cultural insights.

About three-quarters of all Israelis are Jewish. But most of these are secular Jews — non-practicing. About 15 percent of Israeli Jews are Orthodox — very religious, and living conservative lifestyles that require them to be apart in many ways. Entire districts of Jerusalem are known as “ultra-Orthodox.” And about 20 percent of the population is Arab Israelis — generally Muslim Palestinians who never left after the formation of Israel. Christians, who are mostly Arabs, make up a very small and shrinking minority.

The diversity of Israel’s Jewish melting-pot community shows itself in the way people dress. This is especially evident at places of worship and in ultra-Orthodox neighborhoods. With the help of a local guide, like Abie Bresler, simply people-watching comes with fascinating cultural insights.

Rick: Walking down the street, there are so many different fashions, different ways people dress.
Abie: Well, that’s because they express their belonging to a certain group and following a certain rabbi. Different rabbis set standards of how their followers should be dressed.
Rick: What does the block on the forehead indicate?
Abie: Well, in the Scripture, it says you should always have the love of God on your mind. So in that capsule they have a parchment with that Scripture.
Rick: What’s the significance of the yarmulke?
Abie: Jews wear yarmulkes because they are constantly reminding themselves that God is above them.
Rick: Ah, so everybody who’s wearing a yarmulke, it’s a constant reminder: Ttheir Maker is up above.
Abie: Definitely.
Rick: Now, you see a lot of Orthodox, even the little boys, with long ear locks.
Abie: Regarding the ear locks, the Torah is very specific: “Thou shalt not shave the sides of your face.” And these people take those words as it is written.
Rick: You notice women are dressed quite modestly.
Abie: The Orthodox women are always dressed modestly. But when they get married, they take it one step upwards, and they cover their hair in public.
Rick: Now, most people wear black, among the men. Why is that?
Abie: The dominant color amongst the men is black because they’re still mourning the destruction of Jerusalem, nearly 2,000 years ago. Regarding the hats, it’s part of, actually, the uniform defining which movement you belong to. So, by looking at somebody, you can tell if he’s Ashkenazi, and which movement amongst the Ashkenazi, or Sephardi, or Lithuanian, and so on and so forth.
Rick: This man has a striped robe.
Abie: That’s a declaration that he belongs to a certain movement, which is considered very extreme, and also does not acknowledge the legitimacy of the state of Israel.
Rick: So there are many different stripes of Orthodoxy in the Jewish faith.
Abie: Definitely. In Jerusalem, 19 amongst the ultra-Orthodox.
Rick: And it’s like the rabbis are almost like pop stars — they have their own following. These are the great teachers.
Abie: Uh, more than pop stars.
Rick: More than?
Abie: More than pop stars, sure. Put it this way: They’re spiritual stars, without the pop. 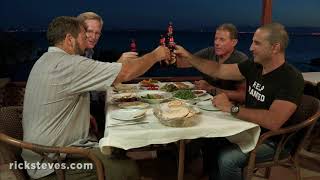