Venice’s superpower trading status dropped after new trade routes were discovered beyond the Mediterranean. Rather than adapt, Venice chose to party, as seen in the Museum of 18th-Century Venice and the city’s over-the-top celebration of Carnevale.

The venerable Caffè Florian, one of the first places in Europe to serve coffee, has been the place for a discreet rendezvous since 1720. Today, when locals want to impress visitors, they bring them here for a drink. In these richly decorated 18th-century rooms, Casanova, Lord Byron, and Charles Dickens have all happily paid too much for their coffee.

Venice peaked in the 16th century. But after the discovery of America and new trade routes outside of the Mediterranean, its power plummeted. As Venice fell, its appetite for decadence grew. Through the 17th and 18th centuries, the Venetians partied, as if drunk on the wealth accumulated through earlier centuries as a trading power.

The palace of the Rezzonico family, overlooking the Grand Canal, is the Museum of 18th-Century Venice, and an ideal place to ponder the decadence of that age.

The grand ballroom was designed with a ceiling that opens up into the heavens. Imagine the hobnobbing here as Venetian society gathered under candlelit chandeliers.

The 18th century was a time of great change. The new ideas and innovations of the Enlightenment swept more adaptable societies upward into a thriving modern age. Meanwhile, a Venice in denial declined. Insisting it remained exceptional, Venetian society chose to dance rather than to adapt.

Partygoers revel behind masks — scenes Casanova would have enjoyed. Gentlemen dressed to the max, ladies with powdered hair piled high. And everyone used a mask to be devilishly incognito.

Delightful Rococo portraits by the female artist, Rosalba Carriera, stoked aristocratic egos. Longhi painted wealthy family scenes — showing a society bored and, it seems, with no shortage of leisure time. And landscape painters like Canaletto captured the wonder of the city with paintings that became the rage. These served as souvenirs for rich tourists after Venice became an obligatory stop on the Grand Tour.

Remnants of the city’s decadent age of decline survive, like its many colorful mask shops. These papier-mâché Venetian icons — which you can see being made and artfully painted in shops around town — gave well-bred aristocrats anonymity during party seasons like Carnevale.

Throughout Europe, but especially here in Venice, Carnevale provided a safety valve for people to really cut lose before Lent — a time of austerity leading up to Easter. That’s when rich and poor alike enjoyed a burst of Mardi Gras–style fun, when anything goes…and nobody knows.

As life got frilly, so did the music. The Musica a Palazzo recreates a Baroque evening, letting you be a guest at a noble palace. Venice was home to influential composers and for two centuries, a force in the world of opera. Tonight, it’s The Barber of Seville by Rossini.

The performance — three acts in three different rooms — is punctuated by social time with Prosecco.

The tradition of crowd-pleasing music continues every night on St. Mark’s Square, where café orchestras keep that uniquely Venetian dolce vita going well after dark. This scene evokes that last chapter in the Venetian Republic, when it morphed from a powerhouse to a romantic traveler’s dream come true. 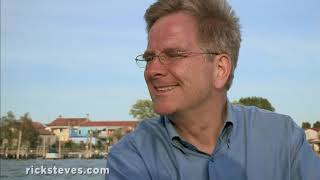 The Venetian Lagoon and the Birth of Venice