Bruges has a lot to offer from its historic past: traditional lace-making, medieval tapestries, a Michelangelo "Madonna and Child," and a fine Memling altarpiece that comforted hospital patients in medieval times and visitors today.

In the 1500s, rich men and women decided that lace collars, sleeves, and veils were fashionable. For the next two hundred years, lace was the rage. It all had to be made by hand, and countless women earned extra income meeting that demand. This school makes sure that traditional lace making survives in Bruges. People from around the world come here to study these 400-year old techniques.

To make bobbin lace (which originated here in Bruges), women juggle different strands tied to bobbins, “weaving” a design with the many threads. Unlike knitting, lace making requires total concentration, as you follow intricate patterns.

Nearby the Gruuthuse Museum, a 15th-century mansion of a wealthy Bruges merchant, displays period furniture, tapestries, and much more.

This region was renowned for fine tapestries. They were popular with the wealthy — colorful, great for warming up big drafty interiors, and a fun opportunity for a rich guy to tell a story. This series tells of courtship and marriage in the early 1600s.

The scenes and their old French captions subtly spin a story of youthful lustiness that upsets stereotypes about medieval piety. Scene I, called Soup-eating Lady, shows a shepherd girl with a bowl of soup in her lap. The flirtatious shepherd lad cuts a slice of bread (that’s foreplay in medieval symbolism) and — according to the text — saucily asks if he can "dip into the goodies in her lap." Nearby, another woman brazenly strips off her socks to dangle her feet in water.

In Scene II called The Dance, couples freely dance together under the apple tree of temptation and around a bagpipe — symbolic back then of hedonism. The Wedding Parade shows where all this wantonness leads — marriage. Music plays, the table is set and the meat's on the BBQ, as the bride and groom enter…reluctantly. The bride smiles, but she's closely escorted by two men, while the scared groom gulps nervously. Finally, in the last scene called Old Age, the now elderly husband is tangled in a wolf trap. The caption reads, "Alas, he was once so lively, but marriage caught him, and now he's trapped in its net."

The merchant who lived here had it all. In fact, his mansion even had a private chapel with a box seat overlooking the cathedral altar.

This was the ultimate in church-going convenience — he could attend Mass and not even leave the house.

For 600 years the Church of Our Lady has stood — with its 400-foot tall tower of bricks — as a memorial to the power and wealth of Bruges at its height.

Inside reclining statues mark the tombs of the last local rulers of Bruges, Mary of Burgundy and her father Charles the Bold.

This delicate Madonna and Child is said to have been the only Michelangelo statue to leave Italy in his lifetime. It marks the tomb of the wealthy Bruges businessman who bought the statue in Tuscany.

Mary, slightly smaller than life-size, sits while young Jesus stands in front of her. Their expressions are mirror images of each other — serene but a bit melancholy, with downcast eyes, as though pondering what lies ahead for the young child. Though they're lost in thought, their hands instinctively link, tenderly.

Just across the street, a monastery ran a hospital. It recalls how the sick were treated. It also displays masterpieces by the great Flemish painter — hometown boy — Hans Memling.

Some 500 years ago, the nave of this former church was lined with the sick and dying. Nuns served as nurses.

In many ways, this was less a hospital than a hospice. It helped the down-and-out make the transition from this world to the next. Rather than dieing in the streets, they died here…with dignity. Care was more for the soul than the body.

Religious art reminded those suffering that Christ could feel their pain, having lived it himself.

Today, rather than the sick and dying, the wards now house a handful of exquisite paintings by Hans Memling.

Memling was the master of "Flemish Primitives." "Primitive" is not an insult. It was a 19th century term for the nostalgic, pure and spiritual art of these highly skilled 15th century oil painters. Employed by and often portraying Belgium’s wealthy; they captured their world in astonishing detail.

Hans Memlings’ St. Johns Altarpiece was designed to comfort patients in the hospital. Gazing at this slice of heaven, they could imagine leaving this world of pain and illness, and joining Mary and Jesus in a serene setting, listening to heavenly music, and conversing with the saints. Memling's heaven echoes wealthy Bruges in the 1400s, showing the city skyline, oriental carpets that passed through here, fine furniture manufactured by the city, and the latest Italian fashions.

In the right panel Memling then takes us on a journey to the end of the world. John the evangelist sits on the island of Patmos — transfixed as he envisions the Apocalypse now. He writes down his vision — a revelation of the end of time — which eventually becomes the last book of the bible…Revelations.

Up in heaven, in a rainbow bubble, God opens the seals of a book, unleashing awful events — fires, plagues and wars that stretch as far as the eye can see. The dreaded Four Horsemen gallop across the dreamscape chasing helpless mortals who scramble for cover.

In the St. John Altarpiece, Hans Memling shows us the full range of his palette, from medieval grace to Renaissance realism to avant-garde surrealism. (…All in a luxurious setting somewhere between Bruges and heaven.) 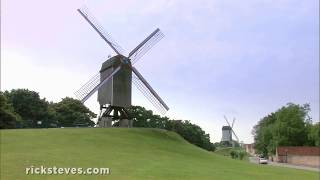 Treasure of the British Library