Normandy, the site of the greatest military invasion by sea of all time, welcomes visitors with powerful museums, memorials, and exhibits, while vast military cemeteries make the human cost very clear.

Bayeux, with a pleasant town center and only six miles from the D-Day beaches, makes a great home base for visiting the area’s sights.

Along the 75 miles of Atlantic coast nearby you’ll find countless memories of the largest military operation in history. It was on these beautiful beaches, at the crack of dawn, June 6, 1944, that the Allies finally gained a foothold in France and Nazi Europe began to crumble.

During the D-Day invasion, American troops and their allied partners courageously assaulted the German-occupied cliffs using grappling hooks and ladders. While ultimately victorious, they suffered horrendous losses. Smashed German bunkers and bomb craters remain, only hinting at the unimagineable carnage and chaos of that momentous day.

The small town of Arromanches was ground zero for the D-Day invasion. Almost overnight, the allies erected an immense pre-fab port enabling them to begin their victorious push to Berlin.

Imagine the building of this incredible harbor. Seventeen old ships steamed across the English Channel and were sunk, bow to stern, creating a four mile long protective breakwater. Then, with massive contrete platforms and roads floating on pontoons nearly a mile long, the harbor was completed. Within six days 300,000 allied troops and all their equipment had established a beachhead here in France. And less than a year later…the war was over.

Today, sixty years later the town, with its beach combers, holiday trinkets, and families at play, still seems to celebrate the allied victory.

Peace came at a huge price. The invasion cost over 4,000 allied lives. The American Cemetery at St. Laurent crowns a bluff just above Omaha Beach and the eye of the D-Day storm. Thousands of tombstones glow in memory of Americans who gave their lives here to help free Europe. The bluff overlooks the stretch of Normandy beach called “the portal of freedom.” While tranquil now, for those of us who weren’t there, the horror of that day is impossible to imagine.

From the memorial — with a bronze statue symbolizing the spirit of American’s youth — a peaceful sea of crosses invites those visiting to wander and ponder the sacrifice so many brave men made in the cause of freedom.

Immediately after the war, all the bodies were buried in temporary graves. In the 1950s, when this cemetary was established, the families decided if the bodies should remain with their comrades or be brought home. Officers are disproportionately represented. Their families figured they’d prefer to be buried with the men they commanded and with whom they fought and died.

Nearby, another military cemetery is the resting place of 21,000 German soldiers. The centerpiece symbolizes German mothers and fathers who lost their children. The site — glum, with two graves per simple marker and dark crosses that huddle together in groups of five — is a somber reminder that many young Germans were victims of Hitler as well.

The best WWII museum in France is in Caen — the first big city freed by the allies. Officially named the Memorial for Peace, it puts the Battle of Normandy in a broader context.

You start with a downward spiral stroll, tracing (almost psychoanalyzing) the path Europe followed from the end of World War I to the rise of fascism and into World War II.

You’ll get a thorough look at how World War II was fought — from individual weapons to floating airports to the two-ton V-I — the unmanned predecessor of today’s smart bombs — to the D-Day landings.

The Cold War wing gives an overview of the bipolar world that followed WWII. It gives insights into the battle waged by the USSR and the USA for the hearts and minds of their people until the collapse of Communism in 1989.

The memorial then takes you beyond war. The Gallery of Nobel Peace Prizes celebrates the irrepressible human spirit. It honors the courageous and too-often-inconspicuous work of people like Albert Schweitzer, Mother Teresa, Martin Luther King, and many lesser known champions of justice who understand that true peace is more than just an absence of war.

The contemplative finale is a walk through the U.S. Armed Forces Memorial Garden. Plaques honor the sacrifice young American soldiers made for Europe. The sight of children enjoying this memorial as a playground captures the spirit of the quote etched in the pavement: “From the heart of our land flows the blood of our youth, given to you in the name of freedom.” 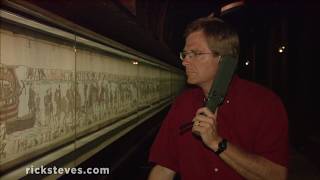