We see the toll of fascism in concentration camps, the Anne Frank House, and D-Day memorials. The best way to prevent the rise of fascism is through education. An electorate capable of independent thought can help ensure that “never again” will we experience such inhumanity.

The sweeping impact of fascism can be felt to this day in the many memorials across Europe that remind us of those horrific years.

It's felt in the German [and all] concentration camp memorials. They make us pause and attempt to comprehend the unthinkable numbers.

The Anne Frank House in Amsterdam humanizes the horror of the Holocaust through the story of just one of its [more than 10] million victims.

At the D-Day memorials in northern France [such as the WWII Normandy American Cemetery, shown here], we try to appreciate the sacrifice it took to defeat the hateful ideology and re-establish freedom.

In Spain, near Madrid, a towering granite cross marks the Valley of the Fallen. Originally famous as the site of Francisco Franco's tomb, today it's considered a memorial to all the victims of Spain's devastating Civil War.

In Berlin, the Memorial to the Murdered Jews of Europe is a touching and evocative field of gravestone-like pillars. It's designed to cause people to think and to ponder this horrible chapter in human history.

A common refrain at many of these memorials is, "Never Again." But even today, in well-established democracies throughout the West, societies are facing many of the same emotions, frustrations, and inequities that, a century ago, opened the door to fascism in Europe.

Holger: If I ask myself "could it happen again?" I would say no…but it has happened in Germany, and it might happen again.

Francesca: So, if you bring all of these elements together, a moment of crisis, a strong leader who knows how to take advantage of the fear and you don't have a really true press where there's no exchange of opinions, I think there's a possibility for these things to happen again.

Georg: Fascism happened here in Germany, the center of civilization, in the land of Beethoven, Goethe, and Schiller. And if it could have happened here, it can happen anywhere in the world.

Today Germany deals responsibly with the legacy of pain it brought Europe. Germany knows the importance of a well-informed electorate. Every school child learns of the Holocaust with a visit to a concentration camp. Nazi documentation centers in major cities [such as Nürnberg's, shown here] tell the story.

It's all part of an educational program to teach how fascism took hold here and how it led to some of the worst horrors in history.

Andreas: In Germany we definitely believe that education is one of the main ways to make sure something like this will not be repeated.

Holger: Because if you know what mechanisms were working and what mechanisms of economy and politics were at play in the 1920s and '30s then you can see what is happening today and try to prevent it.

Francesca: Education is everything. Even for there to be an electorate that is capable of thinking independently, you need that electorate to be educated.

Alfio: Focus on the education system. Make citizens more than consumers, and very importantly, having media that are not biased. Independent information.

But perhaps most important is the preservation of government by the constitution and the rule of law, and not by the dictates of a charismatic all-powerful leader.

Francesca: When there's great fear of the future, where what people have feels threatened and they're afraid to lose it, then it's easy for populism to come into play, and it's easy for leaders who present themselves as interpreters of that to take hold.

Andreas: One of the things that you can do to make sure that something like this will not happen again here or in other countries is not trust people that promise very easy answers for very complicated problems. It never works.

Francesca: Democracy is fragile, and it should not be taken for granted, so to defend it I think is important. I think we can learn not to follow leaders into the abyss and to maintain critical independent thinking.

As we've seen through the story of fascism in Europe, charismatic leaders rose to power through the democratic process and then seized extra-constitutional power by unlawful means. When citizens allowed leaders to do this, individual freedoms and rights soon fell by the wayside, and democracy was lost. While democracy was restored to Western Europe, it easily could have been lost forever — and the cost was millions of lives. As history continues to unfold around us today, it's important to remember that freedom and democracy are not guaranteed. We are all participants and we are all responsible. 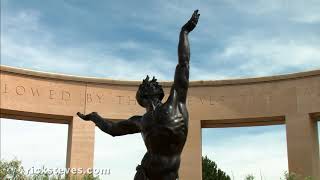