We ponder the millions of victims of fascism commemorated in memorials throughout Europe, from Nazi concentration camps, the Anne Frank House, D-Day cemeteries, and Spain’s Valley of the Fallen, to Berlin’s Monument to the Murdered Jews of Europe.

The sweeping impact of fascism can be felt to this day in the many memorials across Europe that remind us of those horrific years. It's in the German concentration camp memorials. People come as if visiting a shrine. They pause and attempt to comprehend the unthinkable numbers.

The Anne Frank House in Amsterdam humanizes the horror of the Holocaust through the story of just one of its 6 million victims. Anne’s handwritten diary tells the story of how she lived in hiding. Her loss of freedom, her dreams, her family, and their fate. Anne died just weeks before the end of the war.

Her story has inspired visitors from around the world. At the D-Day memorials in northern France, we try to appreciate the cost took to defeat the hateful ideology and re-establish freedom. The American Cemetery at Saint Laurent crowns a bluff just above Omaha Beach in the eye of the D-Day storm. A bronze statue symbolizing the spirit of America's youth and the sea of crosses invites those visiting to wander and ponder the sacrifice of so many brave men made in the cause of freedom. Nearby, another military cemetery is the resting place of 20,000 German soldiers — reminding us of the toll fascism takes on its own people. The sad sight is a somber reminder that many young Germans were victims of Hitler as well.

In Spain, an hour outside of Madrid, stands a powerful reminder of tragedy and loss from this time. A towering granite cross marks the Valley of the Fallen memorializing the victims of Spain's devastating Civil War — a monument to the potential for hateful ideology to tear a polarized society apart. A solemn silence fills the monumental Basilica dug out of solid rock by Franco's prisoners. Interred here are the remains of tens of thousands of victims from both sides of Spain's Civil War.

Staring into the eyes of those angels with swords, I think about all the heroes who keep dying for God and country at the request of the latter. In Berlin, the Memorial to the Murdered Jews of Europe is a touching and evocative field of gravestone-like pillars. It's designed to cause people to think, to consider man's inhumanity to man, and ponder this horrible chapter in human history. 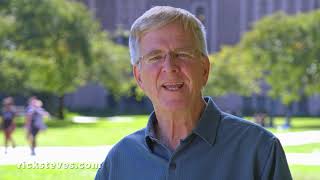 Why We Travel #5: To Connect with Our World