The classic hill town of Cortona dates back to Etruscan times, was ruled by Florence, and is the home of Frances Mayes of “Under the Tuscan Sun” fame. A guide explains that his hometown’s romantic image was created by foreign visitors, while locals take pride in the town’s long history.

With a few bottles of Orvieto Classico in our trunk, we're ready for more hill towns. Crossing from Umbria into Tuscany, our next stop is Cortona.

Cortona has a history that goes back 2,500 years to Etruscan times. It grew to its present size between the 13th and 15th centuries, when it was a colorful and crowded city. It was conquered by the regional powerhouse Florence, and eventually absorbed into its realm.

When Florence took over Cortona, its captains ruled the city from here, the Casali Palace.

Back then — like today — occupation was a thankless task, and every six months or so Florence would have to send in a new captain. When the new captain arrived he would establish his rule by putting his family coat of arms into the building's wall.

These date from around 1600, and were once colorfully painted. The medallions, like much of the city, were made of sandstone, and suffer badly from erosion.

While Cortona is extremely popular with Americans lately, its gritty personality survives.

My friend and fellow tour guide, Giovanni Adreani — whose family goes back seven centuries in Cortona — is joining us.

Giovanni: Many people from US, many Americans, they know Cortona because of the modern novel, Under the Tuscan Sun, but actually, for us, it feels different. It does feel different because it's been 200 years that we have people living in Cortona, foreigners. That romantic view we have about Cortona is about people from France, from England staying in Cortona. It was the grand tour.
Rick: So this dreamy idea we have about Tuscany, it's really 200 years old? Created by the French and by the English?
Giovanni: By the French and by the English. It's a romantic view that they made.

Giovanni: So this is what I mean as a romantic view onto Tuscany. This terrace is made by the people here, time of Napoleon, for enjoy the view of Tuscany, the valley.
Rick: They made it for the tourists.
Giovanni: Yeah. By the way, that's Umbria. Where you see the lake and the hills, here was the border of the Holy Roman Empire. You know Charlemagne? He was until here. And there was the state of the pope. So the Umbrians, they were under the pope for centuries, until the 1800s. But all over Italy is like this: divided. Every hill, every valley, another culture, and so we have many Italys.

The memorial bust of Giuseppe Garibaldi, the brilliant revolutionary and hero in the struggle for Italian unification, enjoys this same view. This is a reminder that uniting the many cultures of this peninsula was the main challenge the fathers of modern Italy faced back in the 1860s.

Via Nazionale, while only named in the 19th century to celebrate Italian unity, has been Cortona's main drag for a long time.

Giovanni: So this is the corso.
Rick: Yep.
Giovanni: It is the main street.
Rick: So people are walking. Passeggiata.
Giovanni: Yeah, because it's easy, it's flat. By the way, the real name is "Via Nazionale," but we call this road "Rugapiana" — that means "flat wrinkle."
Rick: The flat wrinkle?
Giovanni: You saw the other alleys, you know.
Rick: So this is really the only real flat road in town?
Giovanni: It's the only flat road we have.

And sooner or later, those strolling end up on the main square under the old City Hall. The mayor flies three flags: Europe, Italy, and Peace. Tuscany is famously left-wing and pacifist. 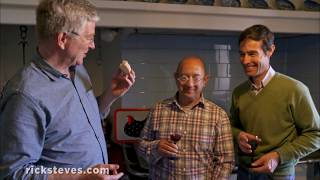