We visit vibrant Nablus, the second-largest city in the West Bank, and nearby, the crowded Balata Camp, which houses Palestinian refugees displaced by the formation of Israel in 1948. It has 20,000 occupants today.

Nablus is the second city of the West Bank in population, with a fine modern center and a long history. In ancient times the Roman Emperor named it the “New City” — that’s “Neapolis,” or “Nablus.”

The people of Nablus are relatively conservative. And, immersed in this vibrant city’s commercial commotion, I found simply being part of the scene a powerful experience.

Famed (or notorious) for its fighting spirit, the city has walls crusty with political posters. These young local men — considered terrorists, or freedom fighters, depending on your perspective — are mostly in Israeli prisons or dead. Yet, they live on with posters that celebrate their commitment to Palestinian independence. As these posters fade, I’m hoping that what seems to me like a new spirit of nonviolence to address the region’s problems reflects a permanent shift in Palestinian strategy.

A recurring symbol throughout Palestine is the key. Many towns display a big key as a reminder of a big issue here: refugees, the hundreds of thousands of Palestinians who were displaced with the creation of Israel in 1948. Here in the West Bank — over 60 years later — many refugee camps are still filled with Palestinian families who fled when their land became “Israel.”

To this day, these people — whose parents and grandparents, thinking they’d be returning home soon, grabbed their keys and fled back in 1948 — treasure those old keys and are happy to tell their story.

Man: Around the 19th of October, 1948, my family was forced to leave their village. They closed their house, and moved away, waiting for two weeks, and then they will be coming back. Sixty-five years later we are in refugee camp, still waiting for this return, which never happened. Two-thirds of Palestinian people became refuges in 1948, dispersed in 59 refugee camps, and most of them have these old, rusty keys for doors that do not exist anymore.

Among the many refugee camps in the West Bank, the biggest — with over 20,000 people — is Balata, just outside of Nablus. The 10-foot-by-10-foot platting — marking where tents were posted back in 1948 — survives. Only now, the tents are gone, replaced by multi-story cinderblock tenements.

Throughout the world, there are refugee camps like this. Wandering these lanes, I can’t imagine living in such dense population…the lack of privacy…being a parent with children and little money…the frustration of an uncertain future.

For over 60 years, the United Nations has maintained a calming and helpful presence. When the UN-run and -funded school lets out, the streets flood with children happy to practice their English with a rare traveler venturing into their world.

And the commerce enlivening the main street of the camp is like that of a town. We’re joining little Mustafa, who’s been sent by his mother to get chicken for dinner.

Around here, pride can come in little triumphs…and Mustafa is heading home with dinner for the family.

Life goes on in these camps, as refugees wait for a resolution to their plight. 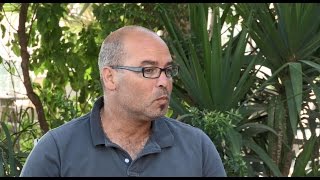 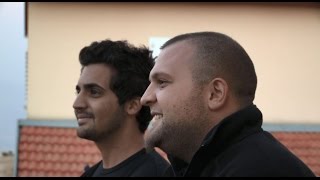 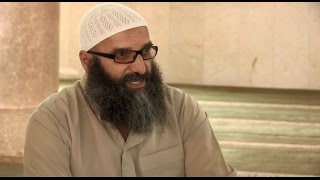 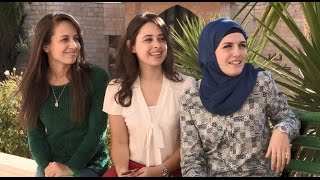